County level bicycle maps are now available in Minnesota. As the second most bicycle friendly state in the United States, according to the League of America Bicyclists, the Minnesota Department of Transportation (MnDOT) has recently announced the first of a series of bicycle maps. These are county by county level bicycle maps for the state. In the link below, you’ll find 125 maps with some counties split into more than one sheet. All at this one link location, click on any County Bicycle Map and see trails, road conditions, and more.

Selecting One of the County Level Bicycle Maps

Once you have selected a map, you can print out any of the maps by county (on 8.5×11 or 11×17 paper) to take along to help navigate your bike adventure. Please note, there are no printed versions of these county bike maps available, so you will need to print you own.

According to MnDOT, “because this is the first effort to show data at the county scale there are some gaps and we will continue to work with the counties to improve the data and layout of these maps with future versions.” They also welcome your comments on how to improve the maps. Submit feedback or changes by emailing bicyclemap.dot@state.mn.us.

Now available quarterly, the 2016 summer edition of the Minnesota Bike/Hike guide is now digitally available and dedicated to all those fathers, nexy Sunday! 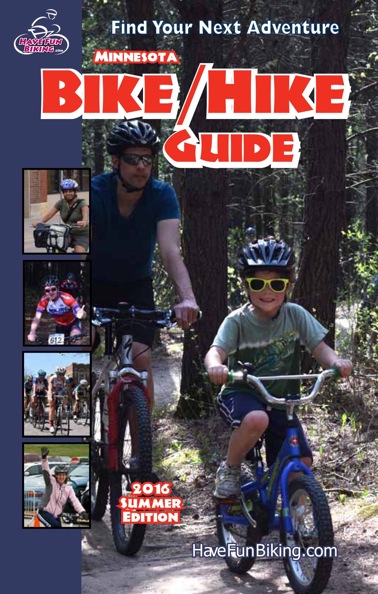 Here is a shot of the e-version of the Summer Minnesota Bike/Hike Guide, now live – enjoy and have fun!.

In our 7th year of printing this handy pocket sized book full of bike travel ideas, HaveFunBiking.com (HFB) has now updated the printed version into a Minnesota e-edition, so check it out. With our new digital platform we are now able to update information on bike travel and tips regularly to help you find your next adventure. Plus, we will be adding additional maps of destinations you may want to explore in the future.

Please take a look at the most recent MN Bike/Hike Guide and bookmark it to your hand held devices for use when on the go. Formatted to fit your mobile phone and note pad the updated e-version offers bike events recently posted and more bike friendly maps, with links, then what is in our print edition. On each map you will find a QR code and link to the HFB Destination landing pages for easy At-A-Glance information when on the go.

From Mankato, over to Stillwater or up to Bemidji, we have highlighted many special landing pages offering you At-A-Glance information when on the go. All offering helpful links while visiting communities you are planning to ride that include: where to eat, where to sleep and other pertinent information that correlates with the maps to help you make your next adventure  fun.

After reviewing the latest edition please share the link of the 2016 MN Bike/Hike Guide with your friends. Give them a chance to find their next bike adventure too. Maybe you will ride together or share your escapades the next time you get together. Either way, the guide opens up many opportunities for bike travel and memories that will last a lifetime!

With 49 years under its saddle and less then 12-days away from its 50th, April 24th, the Minnesota Ironman Bike Ride will celebrate a half century of kicking-off the spring bike season. So we thought it would be fun to look back through the archives to see the progress this popular spring event has made as a Minnesota tradition. 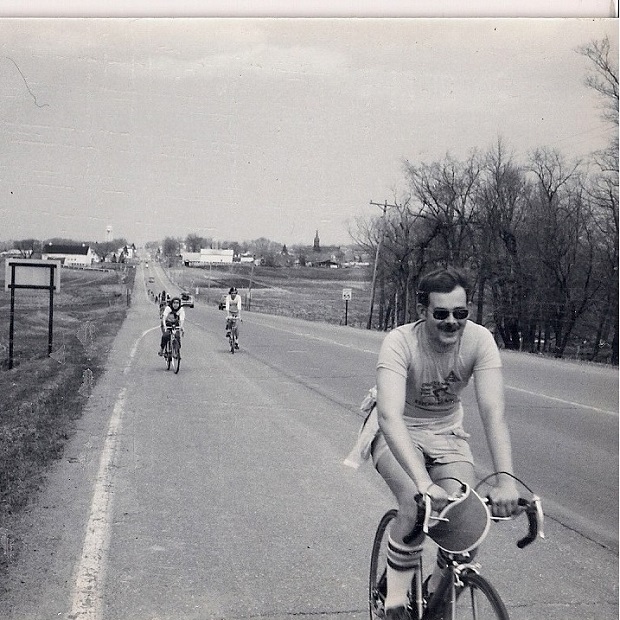 A wave of Minnesota Ironman bike riders in the 60’s heading north on the original century route.

The Ironman Bike Ride in Minnesota began in 1967, the last Sunday in April, primarily as a fund raiser for the Minnesota Council of AYH (American Youth Hostels). At that time the AYH was very small. Thanks to the AYH president, at that time and rides founder, Stan Bezanson the ‘Ironman’ name came from: the time of year the event was to be held; the obvious lack of training after a long cold winter; and the possibility of inclement weather – which is sometimes true! 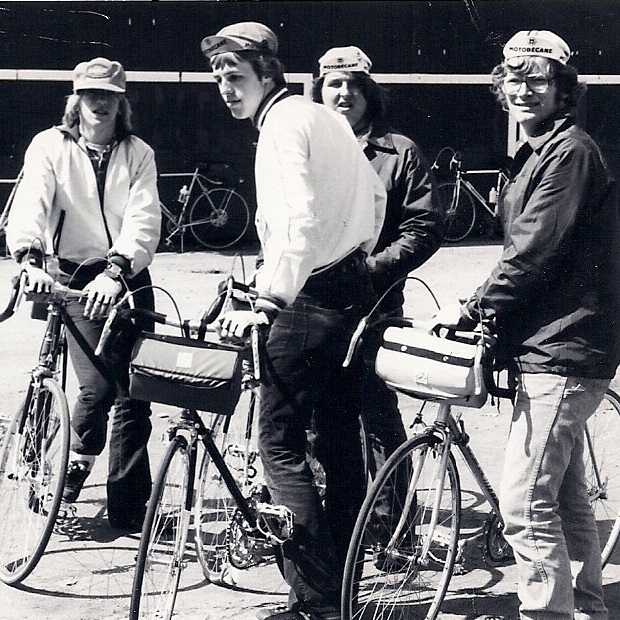 A group of Minnesota Ironman riders from the 60’s gathering at a designated rest stop.

In the early years the ride started in a parking lot near Lake Calhoun, in Minneapolis. The route was a century loop that: first headed northwest to Maple Plain; then north to Hanover; then to St. Michael; northeast to Elk River;  then to Nowthen and up to St. Francis for a brief rest stop. Now the routes turned south heading back: through Anoka; then Crystal; then Robbinsdale; and back to Calhoun Beach. The cost was $2 per rider and the first year 27 cyclists registered and only seven finished the ride. It should be noted here that the temp that day was only 30 degrees with a strong northwest winds and high humidity. Also reported in the April 1981 Hosteler (AYH newsletter), those who finished were indeed “Ironman.” 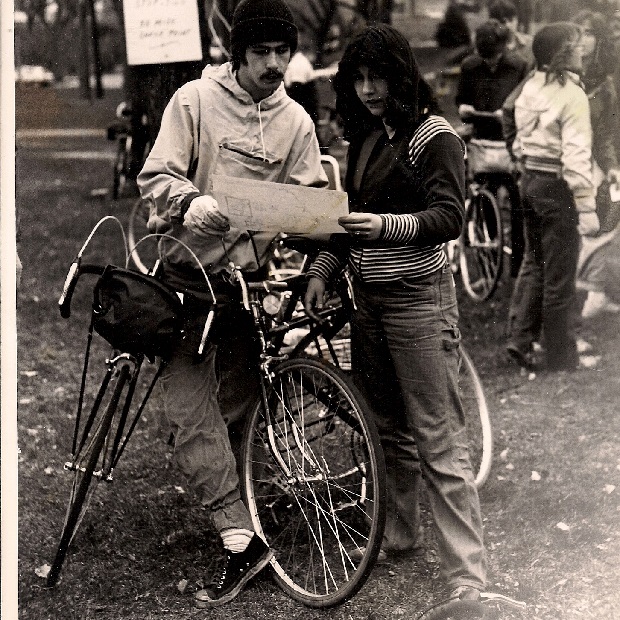 The move to Buffalo 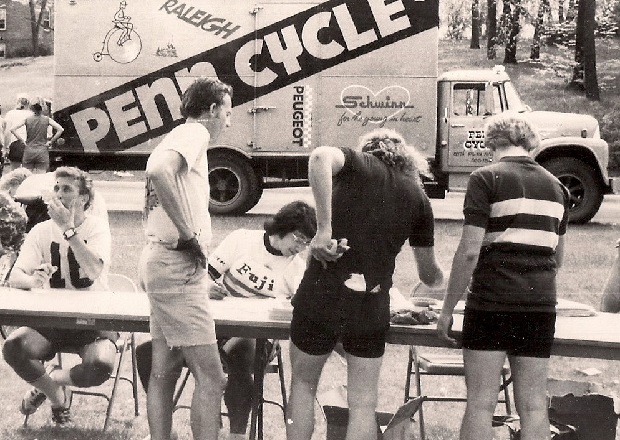 Here at a Minnesota Ironman registration table, Penn Cycles truck is in the background offering assistance.

By 1977, there had already been several changes with the growth of the event. Along with the century ride, a lower loop was established, SAG wagons were being provided and the cost of the ride went up to $4, and $5 for day of registration. Also, the route no longer included St. Michael or St. Francis, finishing under 10 hours was no longer required and cyclists left in groups at timed intervals. 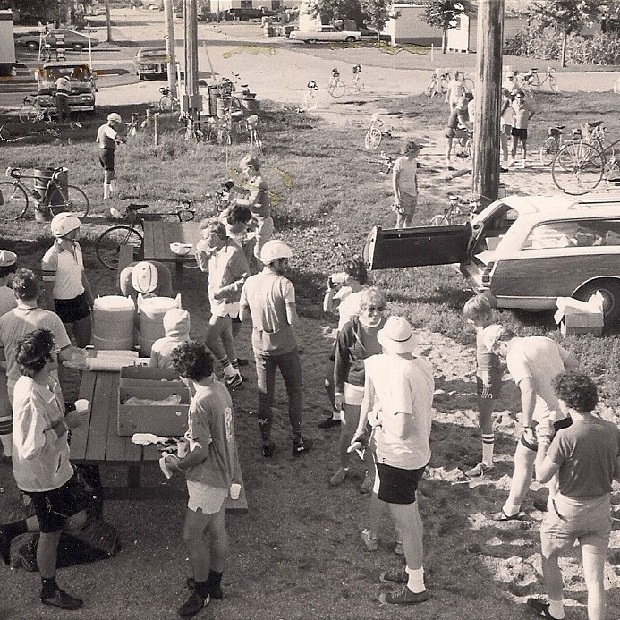 A Minnesota Ironman rest stop location in the early years.

As the popularity of the ride grew the new route started and ended in Buffalo, with a major rest stops in including Delano through the late 90’s.

The move to Lakeville 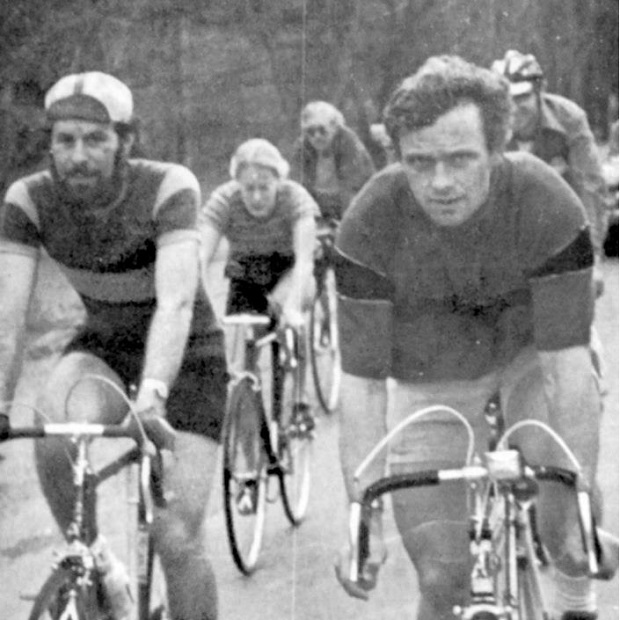 In 1999 the Minnesota Ironman makes a major move to Lakeville. The Lakeville event offered cyclists several route options through the nearby cities of Jordan, LeSueur, Montgomery, Lonsdale, Northfield, Prior Lake and Burnsville. 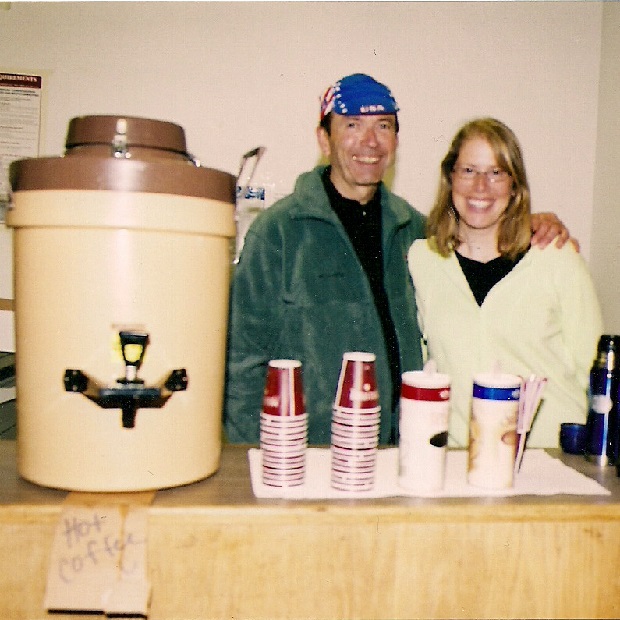 A Minnesota Ironman volunteer tradition, always serving food and drinks at rest stops with a smile. 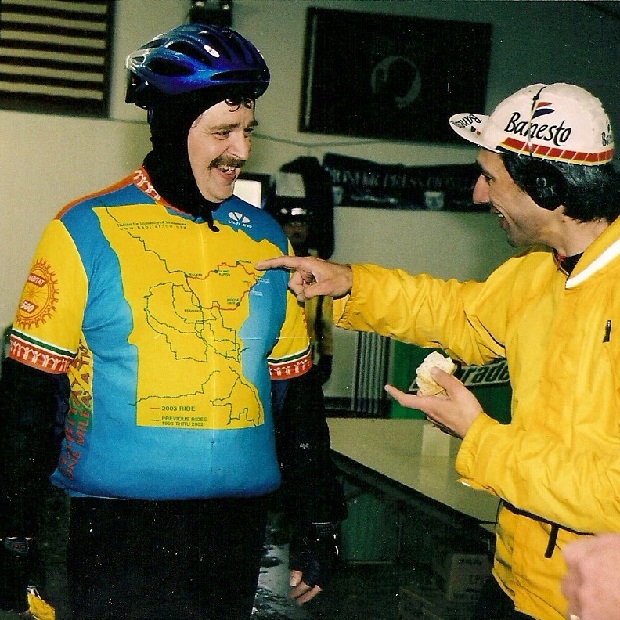 The move to Stillwater 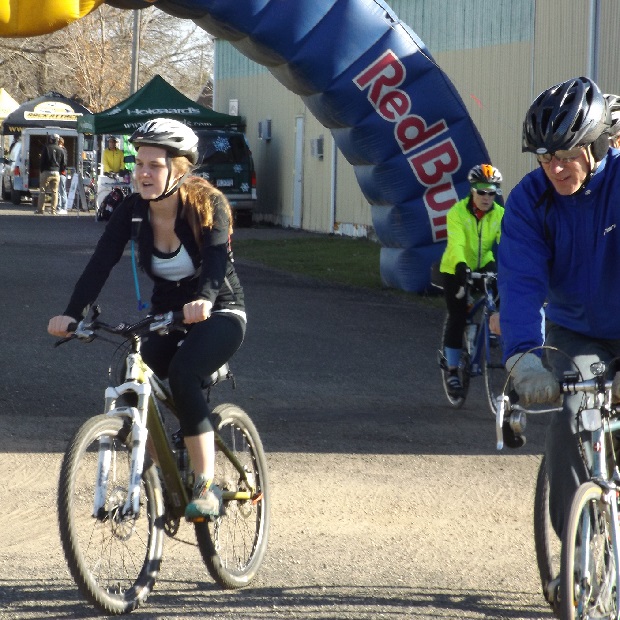 In 2013 Ironman Bike Ride moved from the south Twin City suburb of Lakeville, east to Stillwater its current location at the Washington County Fairgrounds. Now in 2016, as the Minnesota Ironman Bike Ride celebrates its 50th anniversary, register today and be a part of Minnesota’s biking history. 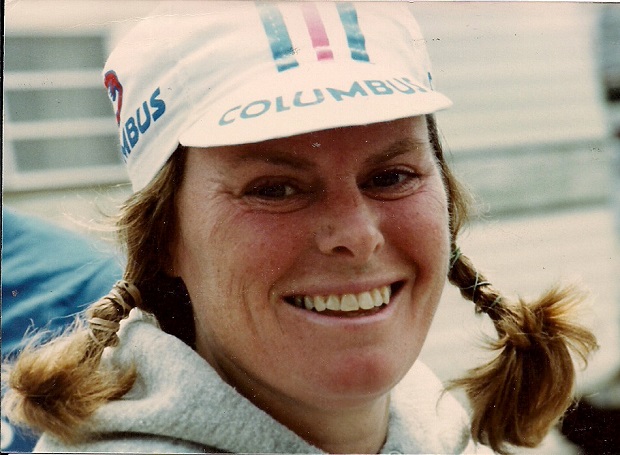 A happy Minnesota Ironman Bike Ride participant from the early years. Where is she now, still riding we hope?

We hope you enjoyed the recap of the first 49-years of the Minnesota Ironman Bike Ride. If you have any details and picture we might have missed we would like to hear from you?

‘Just announced’ -Thanks  to Surly Beer, stop in after this years ride and tip a glass in celebration of your memories and what you would like to see happen in 2017.

About AYH, Hostelling International and the Minnesota Ironman 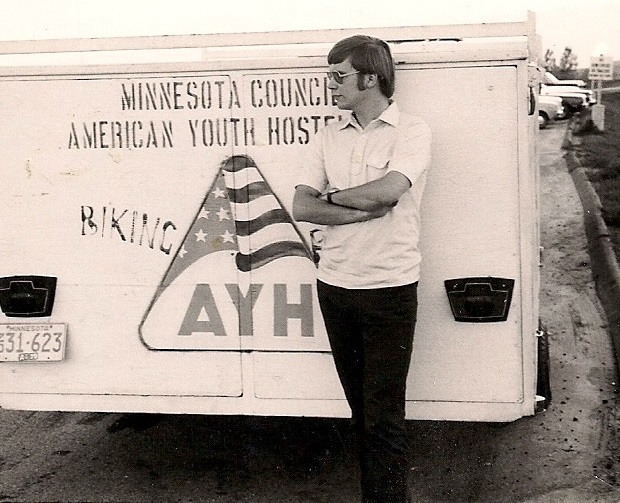 The Minnesota AYH trailer out supporting events around the state.

This mountain bike rider is ready for spring and hitting the trails . The photo here was shot in Lebanon Park, near Lakeville, MN, in 2015.

Thanks for viewing the Bike Pic of the Day here at HaveFunBiking (HFB).

Now, rolling into our 10th year as a bicycle tourism media our goal is to continue to encourage more people to bike, while showcasing unforgettable places to ride. As HFB searches and presents more fun cycling related photos, worth a grin, scroll through the information and stories we have posted that may help you find your next adventure. Then, while out there if you see us along a paved or mountain bike trail, next to the route you regularly commute on, or at an event you plan to attend, be prepared to smile. You never know where our camera’s will be and what we will post next!

Do you have a fun bicycle related photo of yourself or someone you know that you would like to see us post? If so, please send it our way and we may use it. Send your picture(s) to: editor@HaveFunBiking.com with a brief caption (of each), including who is in the photo (if you know?) and where it was taken. Photo(s) should be a minimum of 800 pixels wide or larger for us to consider using them. If we do use your photo, you will receive photo credit and an acknowledgment on Facebook and Instagram.

As HaveFunBiking continues to encourage more people to ride, please reference our blog and the annual print and quarterly digital Minnesota Bike/Hike Guide to find your next adventure. We are proud of the updated – At-a-Glance information and maps we are known for at the HFB Destination section on our website and in the guide. Now, as the Guide goes into its seventh year of production, we are adding a whole new dimension of information, now available for mobile devices.

So bookmark HaveFunBiking.com and find your next adventure – we may capture you in one of the next photos we post.