Hi all! Day two at Interbike’s dirt demo brought more fun in the sun. It gave me an opportunity to review a load of new folding and E-bikes. It seemed any direction you turned, there was an e-bike waiting for you as Tern showcased its latest folding bike model, the GSD.

Tern Bicycles is a relatively new company who burst onto the cycling scene a few years ago with a clean and hyper functional line of folding bikes. Over the past few years they have built a name for themselves through developing folding bikes that not only look great but ride more like a full size bike. In addition to making great bikes, their forward thinking design team has worked to solve problems that plague cyclist with limited storage space.

The Tern GSD folding bike stands for “Get Stuff Done”

Given Tern’s ability to make revolutionary products, I expected a lot from their new bike the GSD. Why GSD you may ask? Well, it stands for “Get Stuff Done” and given the wide capabilities of this bike, that’s exactly what it can do. You see, the GSD is what’s called a mid-tail e-bike. A Mid-tail bike has an extended rear triangle designed to carry additional cargo, people, or accessories. The typical problem with extending the rear triangle is that it can make the bike handle poorly. In the same vain, adding additional cargo to the bike makes pedaling difficult due to the weight.

How Tern gets around these issues and to keep the overall length low is by using the same 20” wheel size as their other folding bikes. They also add folding features to make storage of the bike easier. On top of that Tern also equips the bike with a robust motor and dual battery capable of powering the bike regardless of how much weight is on board. 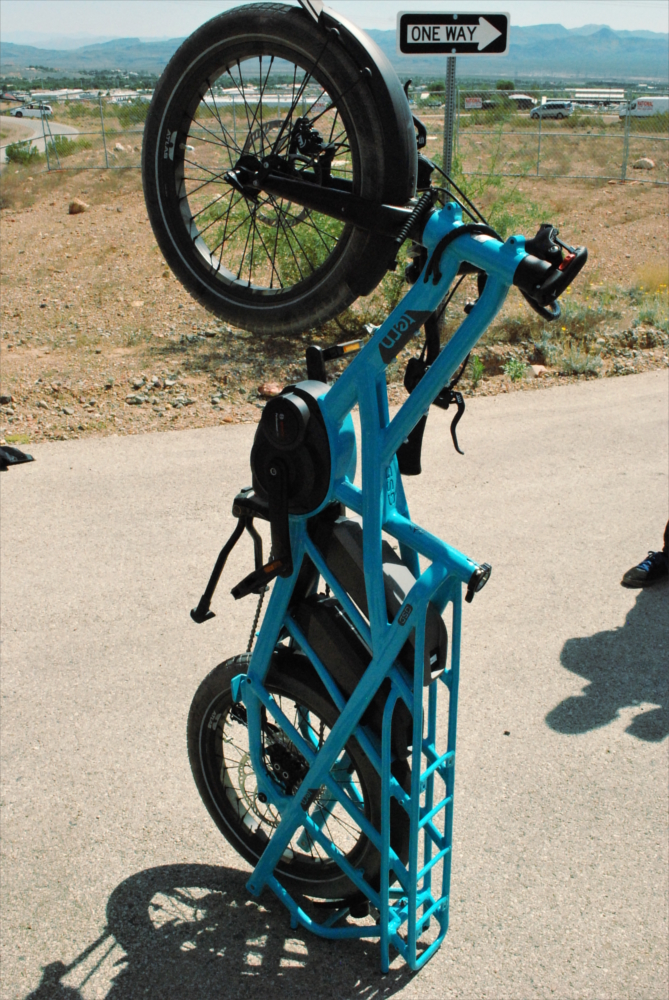 If the GSD were just an Mid-tail ebike, it wouldn’t be that exceptional. However, it isn’t just any old electric assist bike. It seems that Tern has thought of nearly everything. To start, they have custom bags that mount onto the back, but if those don’t tickle your fancy, you can mount waterproof bags from Ortlieb as well. If it’s human cargo you want to carry, there are retractable foot pegs, and a cushioned seat that can mount to the back. As well as carrying people, the GSD also is available with cool stylized front and rear cargo baskets.

Several options for accessories for the GSD folding bike

How the GSD rides

The most impressive thing about the GSD is actually the ride and by that I mean how normal it is. Hop on, pedal away and you will immediately feel at home. The GSD doesn’t suffer from many of the idiosyncrasies typically associated with a mid tail bikes. There is no tiller feeling when you turn the bars. Additionally, the common feeling like you are dragging a trailer behind you is replaced by smooth, quick handling. Overall, the GSD is the most comfortable, maneuverable and capable mid tail bikes I have ridden.

The GSD is designed for both the short and tallest of riders. They accommodate all those different sized riders by using a remarkably adjustable bar and seat post setup 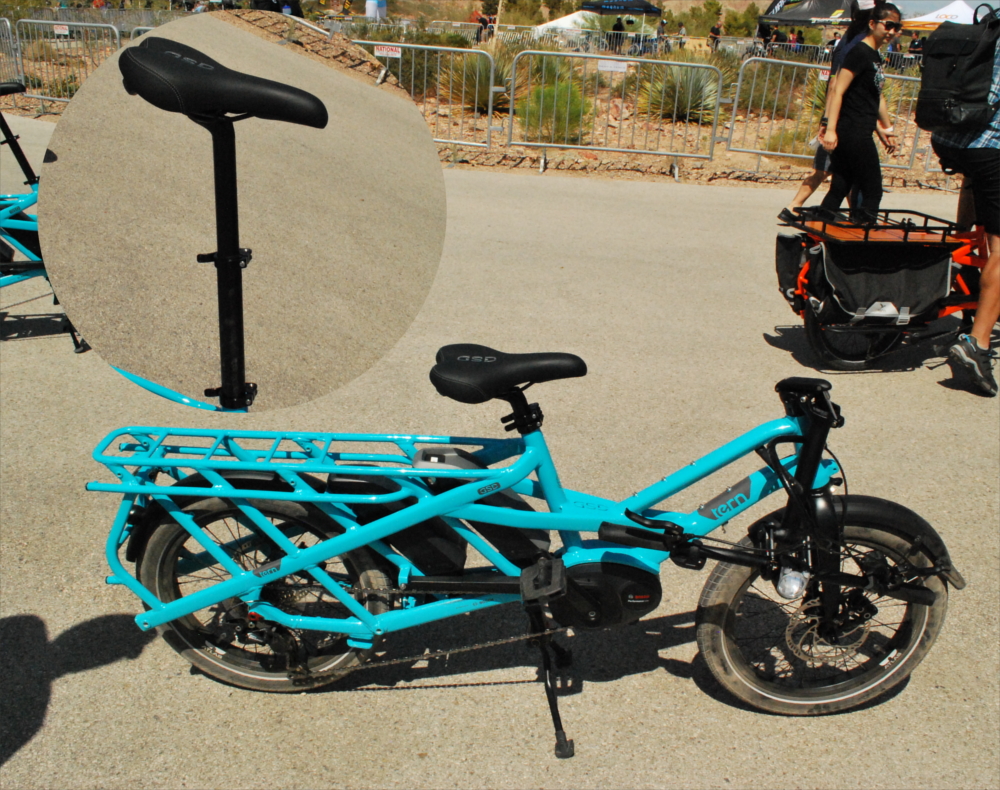 The GSD folding bike with the saddle in its lowest and highest (inset) position.

Tern went a step further to make the GSD capable by adding an E-motor from Bosch to the bike. This motor helps riders power through their duties with speed and confidence. Considering that the GSD will most likely be loaded with more weight than a standard bike, Turn accommodates for a second battery on the bike to extend its range.

While the “Get Stuff Done” model might not be for everyone. Although, it’s details, quality, and stunning ride quality speak volumes for the attention to detail, that Tern brings to all their bikes. Stay tuned for additional reviews of the amazingly well thought out Tern bicycles.