Interbike’s Dirt Demo is always good for a few things, red dust, high winds, and some really expensive bikes just waiting to be ridden – and wow, was I impressed with the Marin B17. Typically the brands at Dirt Demo bring their biggest and best bikes in an effort to wow the throngs of bike shop staff members visiting. Happily, this year many brands brought their price point bikes and I have to say they were all awesome. OK, OK, I realize that calling them all awesome isn’t the type of hard hitting journalism that makes for a serious review. But, with that said, I honestly have to share just how much bike you get for a reasonable amount of money.

Dirt Demo is held about thirty miles east of Las Vegas in a place called Bootleg Canyon. This high plateau offers a great stage for dozens of brands to create a tent village from which to show their product. Bootleg also has paved bike paths, winding roads and miles of offroad trails. For these reviews, I used their trails, and small pumptrack. The trails are predominantly sand, rock and what riders call “kitty litter. While sand and rock is self explanatory, “kitty litter” needs some explanation. Basically “kitty litter” is loose rock, typically smaller than gravel, which is deposited over a firm surface. While sand will slow you down, and rock will make for fun obstacles, kitty litter requires a bike to have excellent traction, and handling to navigate it well. 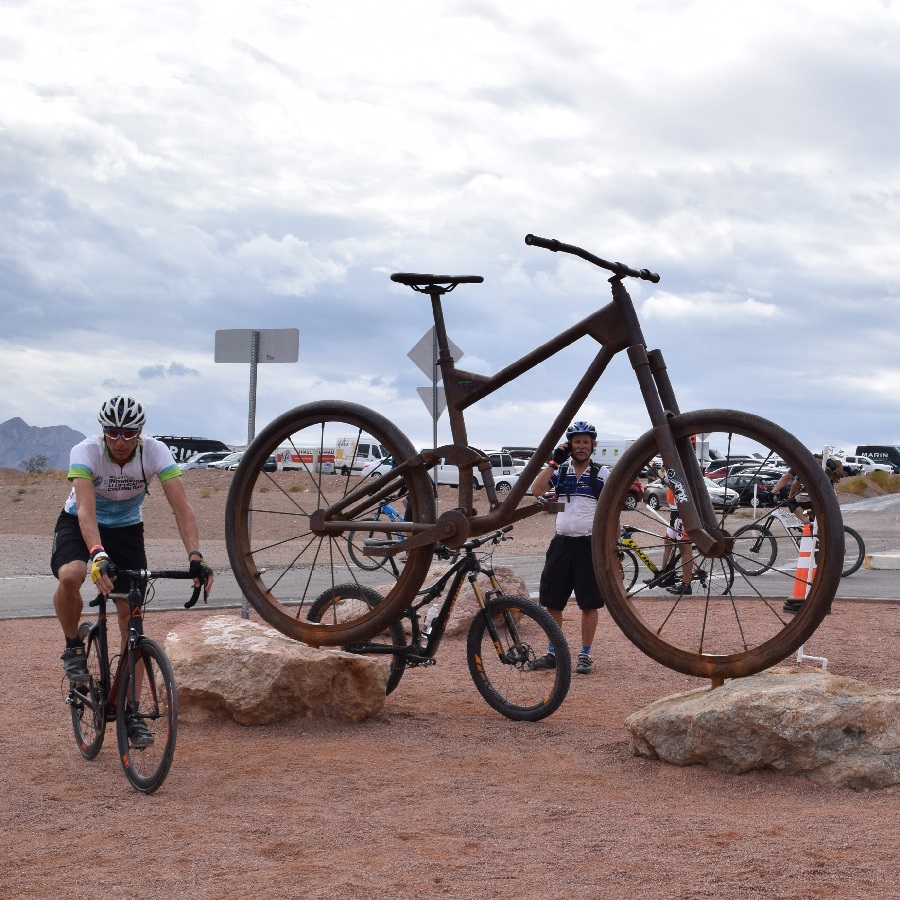 Out in Bootleg Canyon there is plenty of room to test out the latest bikes manufactures are showcasing. 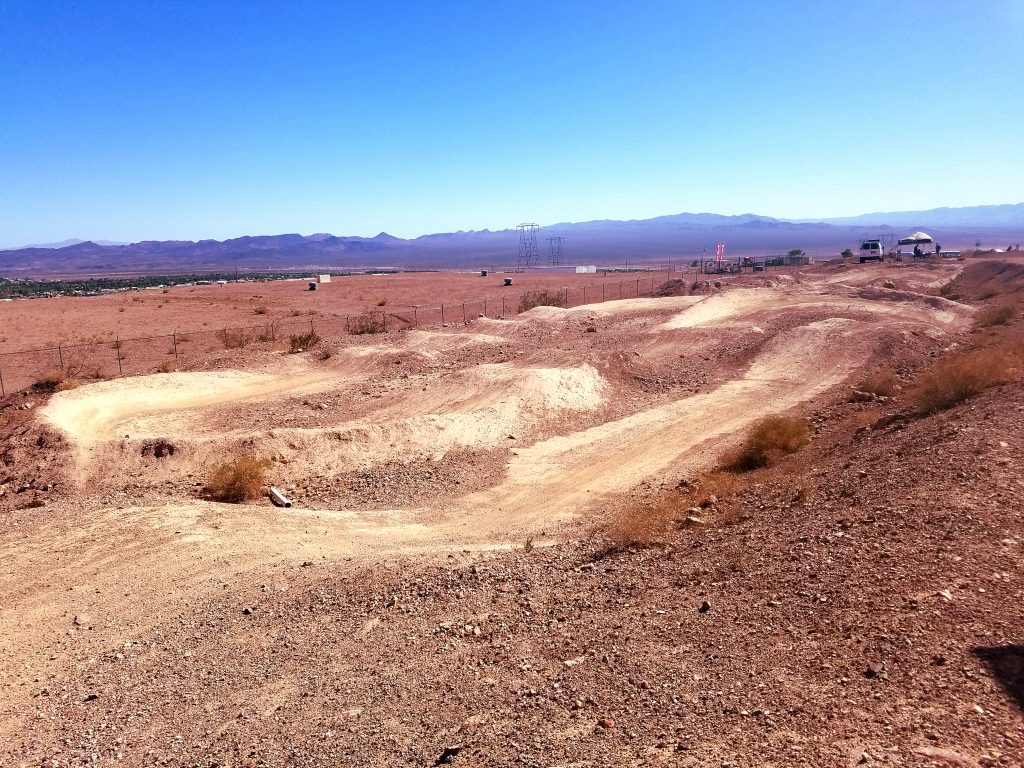 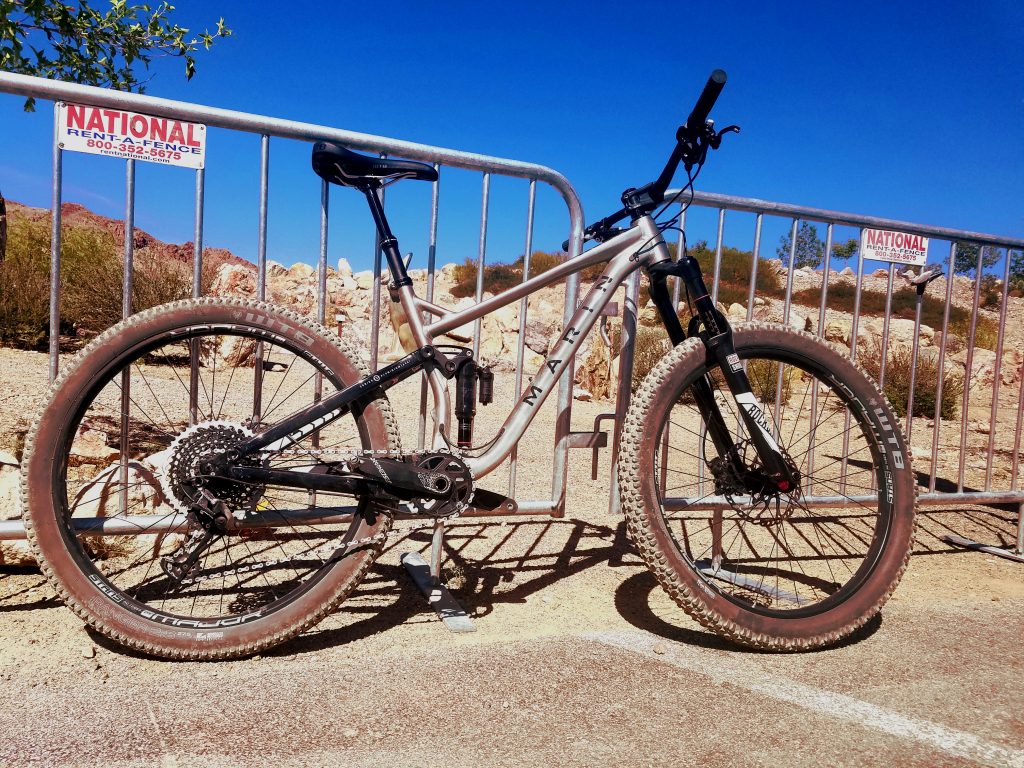 The Marin B17 I rode

Thankfully, the B17 uses an air shocks which made it easy for the the Marin mechanics to quickly adjust the suspension to my riding weight. When testing out any bicycle, it is important to try to isolate problems, adjust, and see if you can get the bike to ride its best. Initially, I felt the suspension offering good control but the bike seemed a bit harsh. Rather than adjusting suspension though, I lowered the tire pressure. For the B17, the harshness came from the tire’s air pressure being too high. Happily, once I lowered it, the bike absolutely lit up.

I was amazed how well the bike handled! To start, it had a near telepathic handling character. Simply think about changing direction and the bike did it. Following that, I was amazed at how well the B17’s suspension operated. Even when thrown down rocky chutes, or off camber, jagged turns, the B17’s suspension soaked up anything I threw at it. Even more, when it was time to turn the bike uphill, the suspension resisted bobbing and transferred my pedaling effort to the rear wheel while still allowing the rear wheel to find traction.

I tested the B17 3 (Marin’s Top end model at $3699.99). While $3700 dollars isn’t exactly wallet friendly, Marin also produces a B17 1 AT $2099.99. That makes the B17 1 an excellent deal for such a full functioned bike. however, you may be concerned that the ride quality of B17 I rode was associated with the high end suspension parts and not the frame design. I ran both the fork and rear shock in their full “open” position. I did this to see if the frame design or shock function is responsible for the ride quality. If the function of the high end shocks were responsible the bike would behave differently in “full open”. Happily I can say that with the suspension setup in “full open” that the B17 happily climbed and descended with control and confidence.

Stay tuned for my Review of the Marin Wolf Ridge, Hawk Hill, and Haro Shift. As for right now, I am off to Dirt Demo to bring you more great product reviews. Feel free to comment below if there is anything you want to see in more detail.