While I wouldn’t qualify my riding history as anything worth bragging about, I have ridden through some spectacular places. One ride I enjoyed was biking through Switzerland, then into Germany on my way to Eurobike. You see, once a year all the biggest bike nerds from around the world descend on the small town of Fredricshaffen Germany to see the newest and shiniest bike goods released that year.

The plan for riding into Germany

About three weeks before we were scheduled to take off for the show, my friend and co-worker Steve brought up the idea of riding the 80 miles from Zurich (where we were landing) into Langanargen Germany where we were staying. Out loud I immediately said “Yes”, but in my head, there were doubts.

I know, why would I have doubts of riding from Zurich through Switzerland’s wine country, along the Rhine, across Lake Constance and through some of Germany’s most beautiful countryside? Please understand, I didn’t have doubts about the ride itself. My doubts came from doing the ride with Steve. He is one of my favorite people and I have ridden with him frequently. On those adventures I have learned a few things that made the idea of a leisurely scenic ride seem impossible. While Steve is one of the nicest people I know, I’m convinced that in a past life he must have committed some horrible crimes and tries to punish himself every time he rides. So, I’m thinking its going to be a big job for me to keep this casual.

An un-scenic start to what would be a beautiful ride

Our flight departed Philadelphia at 7 p.m. and landed in Zurich at 6 a.m. I didn’t sleep well on the plane and realized that I would be riding a whole day on two hours of bad sleep. Steve and I busied ourselves building our travel bikes in the airport baggage claim. We gave the balance of our bags to co-workers who were driving into Germany, then set off into a beautifully sunny August day.

Leaving Zurich airport was an un-scenic start to what would end up being beautiful ride. Strangely, the bike lanes around the airport didn’t seem to go anywhere, but “around” the airport. So after circling a few times we decided to ride up to what looked like a highway off ramp. Fast forward through a few minutes of urban riding, we climbed out of Zurich, into farmlands and the town of Bülach. This town was founded in 1384 and offers many historic and architectural beautiful buildings around the reformed Church of Saint Laurentius and the Sigristenkeller gallery. Shockingly, even though Bülach was less than seven miles from the airport, it is remarkably rural.

Looking down on Zurich from the hills above Bülach

Our loose ride plan was to head north until we hit the Rhine, then follow the river east to Lake Constance and then take the ferry into Germany. Both Switzerland and Germany have well established bike routes to guide us through wine country and onto our eventual destination of Langenargen.

Our route from Zurich, across Lake Constance, and into Germany

Steve’s legs take over his brain

Remember Steve and my doubts when planning this trip? From the start there was no relaxing, or enjoying the sights. Steve, as I expected, went full throttle. As I mentioned before this riding trait of Steve’s was going to be a detriment to my enjoyment riding through Switzerland and Germany. Don’t worry, I had a plan. Every time Steve entered into his personal pain cave, I would stop to change tire pressure, take a picture, check the map or do whatever it took to slow him down.

Before you pass judgement of my passive aggressive strategy, realize that I have had conversation with Steve about this ride being a slow one and to Steve’s credit he agreed. What I know from a history of riding with him is that he may agree to one pace. But his legs will invariably pick another pace, intense. So, I hoped that my plan would work to get this ride down to a conversational relaxing speed. Happily, it only took about 15 minutes of stops, pauses and sidetracks to get Steve’s legs into my way of thinking.

Steve’s leg are starting to get the idea. Here he is surveying an empty field while I pretend to adjust tire pressure.

As we snaked our way down country roads through the vineyards and small towns of Switzerland we crossed many small tributary waterways. These canals are used as irrigation for the vibrant fields this countryside is known for. Our first major crossing, across the river Thur came in the town of Andelfingen. This is the main town between Schaffhausen and Winterthur in the heart of Zurich’s wine country. It boasts cultivated fields, timber framed houses and walking/cycling paths.

Andelfingen is where grapes for Zurich’s sparkling vin du pays ripen in the autumn and is also the home of the Andelfingen castle, a well-kept park open to the public during the day throughout the year. Seeing as we were on our bikes and had to make it into Germany before dark, we did not stop to enjoy the sights here. In retrospect, I would recommend taking more than one day for this ride so you can stop and enjoy the unique personalities of each town.

Lunch under the shadow of a castle

At the point where Lake Constance again becomes the Rhine River, you will find the little town of Stein am Rhein. It is famous for its well-preserved Old Town feel featuring painted facades and half-timbered houses. It’s also where Steve and I chose to stop for lunch 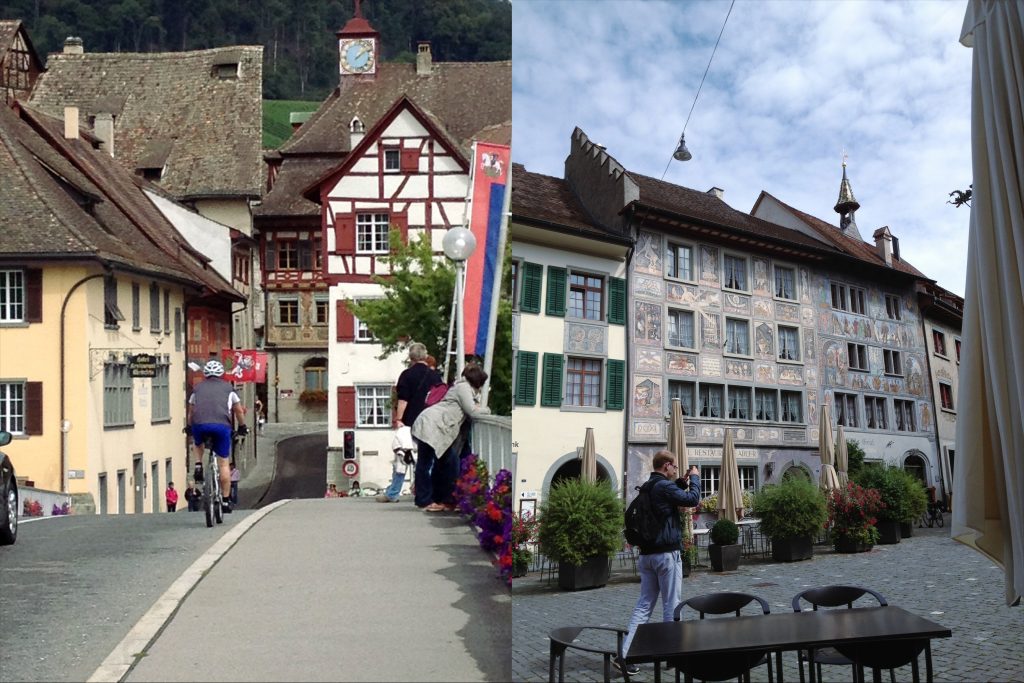 Stein am Rhein is a lively and very charming small town. Among the sights are the Monastery of St. Georgen (one of the best-preserved Medieval monastery complexes), the Lindwurm Museum (depicting 19th century bourgeois) and overlooking everything is the Hohenklingen Castle. The castle here was built high above the town in 1225 and recently renovated. 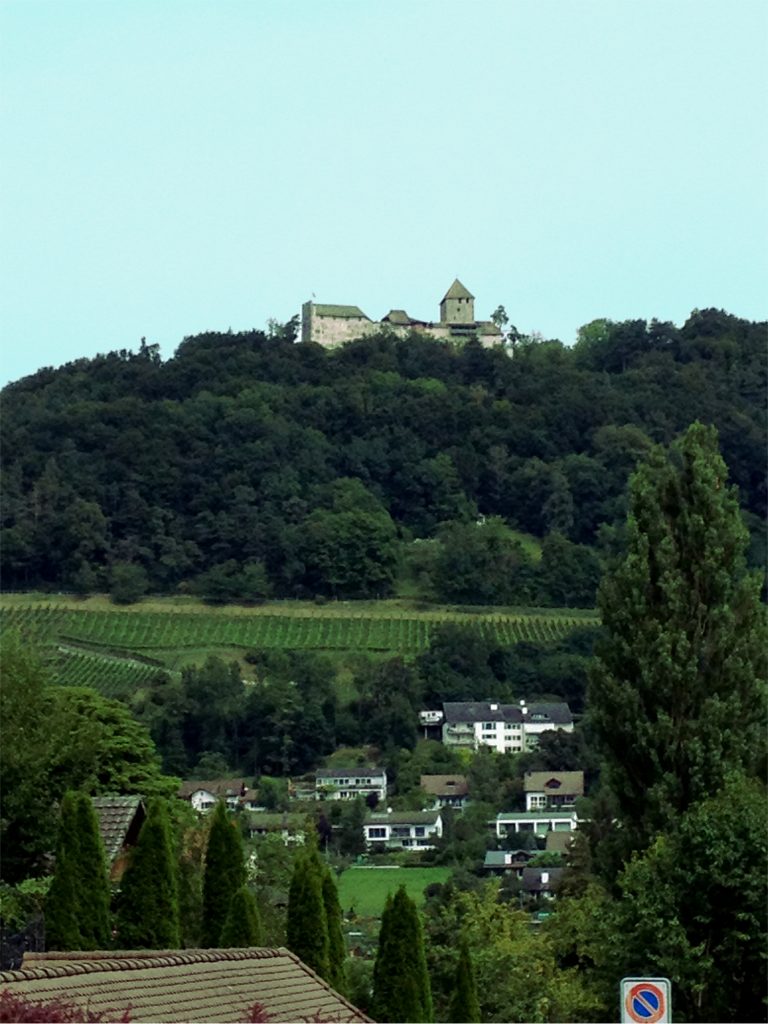 Stein Am Rhein in the shadow of the Hohenklingen castle

Steve and I walked through the center of town with our bikes in tow. We found a courtyard surrounded by fresca painted buildings and filled with restaurants and outdoor seating. We picked a quaint little place that had old wood paneling and benches as our eatery of choice (great carpentry typically means good food after all). For me, the meal and the company were great. I enjoyed a few local brews and a plate of barely cooked beef that could only be described as meat candy.  Armed with bellies full of meat and hefeweizen, Steve an I set off east along the Rhine. 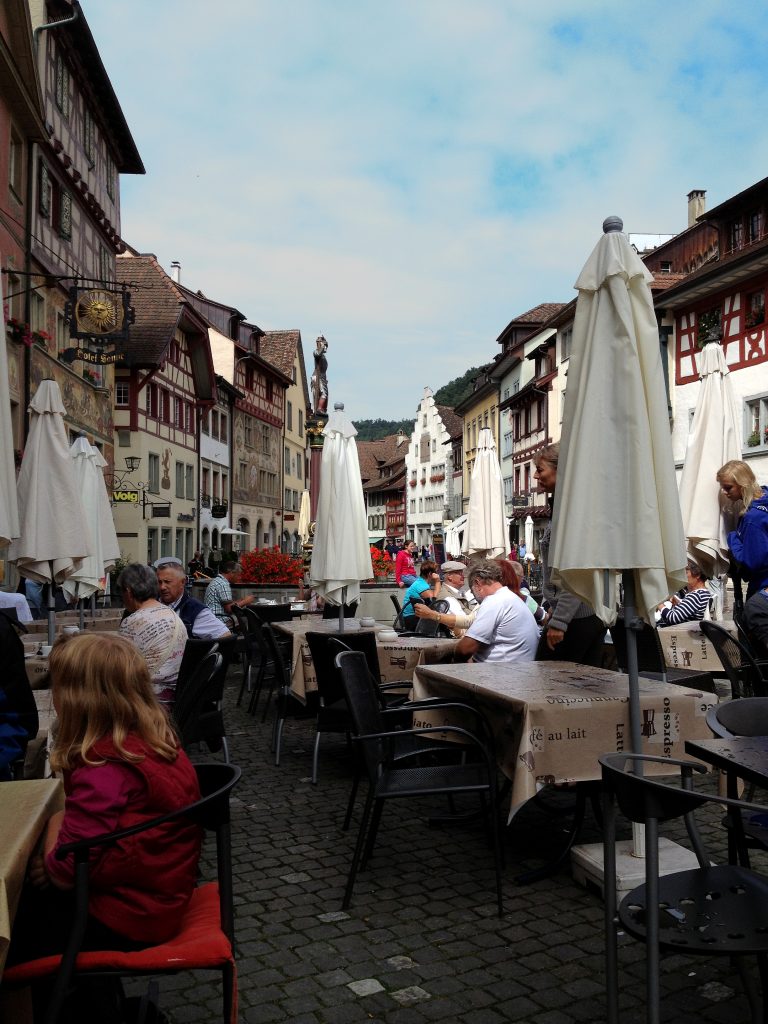 Our old world surroundings at lunch.

The Untersee and ferry trip

As the Rhine empties into Lake Constance, the first large body of water is called Untersee (or Lower Lake Constance). To our left are miles of beautiful waterway and to the right we passed hop farms, villages and port towns that make up the Hochrhein.  Again, with more time I would have loved to stay and explore, but we were on a schedule. Pedaling along, we ambled along the shore for an hour until we entered the more metropolitan area of Constance and Altstadt. In Altstadt we went north, crossed the Rhine River into Staad then boarded the ferry for the last lag into Germany.

A panoramic picture of the bike path and view along the Untersee.

While traveling by bike is convenient, I must say, getting onto the ferry by bike was a real treat. Our fee for the ferry was far less than that of an automobile. We were also the first ones off the ferry and into Meersburg, Germany. Here we were waved through the border checkpoint at 20 mph and got to zoom past miles of waiting cars.

Into Germany and out of my mind

Of the entire ride, Meersburg is by far the most beautiful scenery. Maybe it was the fact that the sun came out in full force or me being rested from the 45 minute ferry ride. Whatever the reason, the ancient town of Meersburg was breathtaking. The town is built on the steep banks of Lake Constance and was originally a vineyard. It’s heritage as a fortress is apparent in the architecture as well as the walled bike route that snakes along the shore of the lake.

Meersburg as seen from the ferry

Once Steve and I left Meersburg my body began to shut down. I wish I could give you a rousing account of the great bike paths and warm forests we passed as we rode through Friedrichshafen and into Langenargen, but to be honest, I was operating in survival mode and not really taking in my surroundings. Maybe it was the heavy lunch, lack of sleep or the miles we rode, but moving became very difficult. As I have said before, this is a ride best done over several days rather than all at once. As a result of riding it in one day, I was now suffering through every additional mile we pedaled.  We finally arrived in Langenargen in the early evening. Happily, I checked into my room, took a quick showers and made it to dinner with the rest of the group.

Reflections on the ride

While at dinner, drinking a Dunkelweiss and enjoying my schnitzel, I reflected back on why this ride was so fun. The first thing I must say is that great company almost always makes a great ride. In this case, Steve and I rode at a similar speed and had great conversation throughout the trip. Additionally, we were both enjoying this route together because of our mutual even keeled demeanor. The great company riding together allowed us to stay positive even when we went slightly off course.

Another help was that I was able to send my luggage ahead and ride the route unfettered. Knowing that I had clean clothes waiting for me when I arrived was a large motivator over the last five miles.

Ultimately, I would recommend this route to anyone. The ride was predominantly flat and had ample opportunities to stop and enjoy the scenery. Additionally, there are more than enough great towns to stop at and enjoy. In fact, this ride could easily be spread across a week, with mornings spent in the saddle and afternoons sightseeing on foot.

See Jen Reviews on the 100 Best things to do in Switzerland.

Are you ready for a great summer of riding? Come join me for the 2014 Tour D’ Amico on July 4th. Members of Hiawatha Bicycling Club (HBC)  and I will be riding in Golden Valley, Minn. and neighboring communities with three scenic route options (29-45-62) to choose and delicious food along the way. There is even a Selfie contest were you can win a 15th anniversary Tour D’ Amico jersey and a gift card for more great food at D’ Amico & Son’s restaurants locations here in the Twin Cities.  See more at: www.TourDAmico.com