A long time ago someone suggested I should buy a folding bike for my morning commute to the office. I laughed at them. Why would I try something that looked like it belonged in 1975?

I’d had enough of being laughed at in school for just being me. I had never needed anyone else’s help to make me look like a moron, so why would I openly court such a thing now as a fully (mostly) grown adult? So I laughed and left it at that for several years. 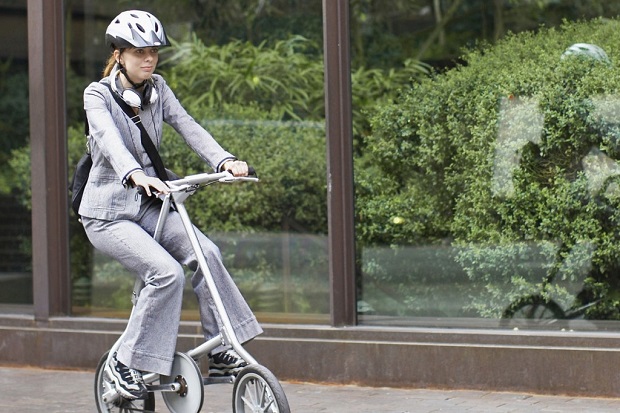 Easy to store, take out, set up and ride, a folding bike is the perfect commuters companion.

Then one particularly wet, rainy, cold day riding my full size mountain bike down along, and through the inner streets of a nameless city I used to live in, I got a puncture at the side of the road I couldn’t fix. I tried to get on several buses with what had been until just a few minutes earlier, my rat-race-smugger-than-thee machine, but now I was refused entry on every one.

Seething with rage and standing at a street corner getting wetter by the minute, I capitulated, chained the bike to a railing and took the subway to work. My shoes made loud squelching noises each time I took a step and people stared at this nightmare visions from the swamp, and kept their distance. It happens; I said to myself and got on with my day.

By the time I got back to the railing to collect my bike several hours later with a new inner tube ready to ride home in what had now turned into a beautiful evening I thought I must have got off at the wrong stop as my bike wasn’t where I thought I’d left it. And then I realized it had been stolen. In fairness to whoever stole the bike, they left my lock and chain in perfect condition.

It was the perfect end to one of the worst days of my life. As I stood there wondering whether this was the kind of thing that caused disgruntles office workers to go on a killing spree, a woman came out the station behind me wheeling a contraption behind her that she then assembled into a bike and rode off, literally, into the sunset.

I went looking for a folding bike the next day and have never looked back. I am a convert and I love it.

Folding bikes have come a long way in the last 20 years or so. Folding bikes, or ‘Folders’ as they are known in the rather tight knit community that has sprung up around them are not the old heavy, hard to ride, ugly monsters they used to be. These days the performance is almost similar to their bigger more rigid cousins. Well, not quite, but close enough.

So click here for Mads Phikamphon’s 10 best reasons to buy a folding bike and commute, we think you will enjoy the read.