The Munsinger Gardens is a great place to stop and relax when visiting or passing through St Cloud, MN on a MRT (Mississippi River Trail).

Get into the zone when continuing your time outdoors and your #NextBikeAdventure. View all the great ideas and bike destinations in the latest Iowa or Minnesota Bike/Hike Guide. Then plan your next outing with family and friends in one of Minnesota’s HaveFunBiking Destinations. An now, check out more stories at Let’s Do MN.

Thanks for viewing our latest bike pic

Now rolling through our 16th year as a bike tourism media, enjoy! As we pedal forward, our goal is to encourage more people to bike and have fun while highlighting all the unforgettable places for you to ride. As we continue to showcase more places to have fun, we hope the photos we shoot are worth a grin. Enjoy the information and stories we have posted as you scroll through.

Do you have a fun bicycle-related photo of yourself or someone you may know we should post? If so, please send your picture(s) to [email protected]. Include a brief caption (for each) of who is in the photo (if you know) and where it was shot? Photo(s) should be a minimum of 1,000 pixels wide or larger to be considered. If we use your photo, you will receive photo credit and acknowledgment on Facebook and Instagram.

As we continue to encourage more people to bike, please view our Destination section at HaveFunBiking.com for your #NextBikeAdventure – Also, check out the MN Bike Guide, now mobile friendly, as we enter into our 13th year of producing this handy information booklet full of maps.

Remember, bookmark HaveFunBiking.com on your cell phone and find your next adventure at your fingertips! Please share our pics with your friends, and don’t forget to smile. We may be around the corner with one of our cameras ready to document your next cameo appearance while you are riding and having fun. You could be in one of our next Pic of the Day.

Join us in August to see why Minnesota is the 2nd best bicycling state in the U.S. as we tour 470 miles of the state’s Mississippi River Trail (MRT) system. Over eight days enjoy pedaling along the scenic and industrious river, from Itasca State Park to the Iowa Border. 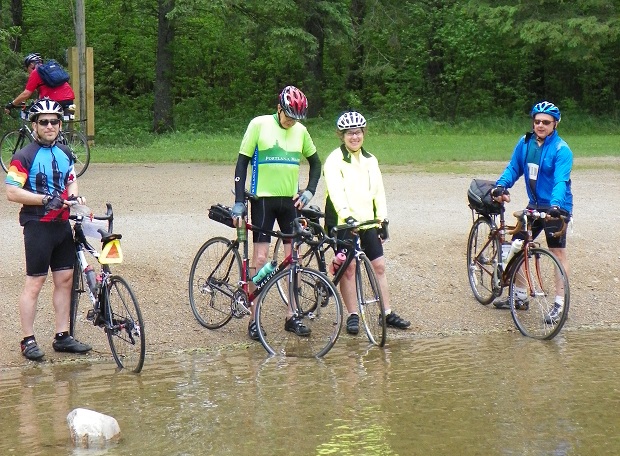 Dipping tires at the Headwaters, at Itasca State Park, on the 2012 Mississippi River Ride -photo HaveFunBiking

In this inaugural Headwaters to Hills Bicycle Tour you will enjoy many celebrations along the way, including: 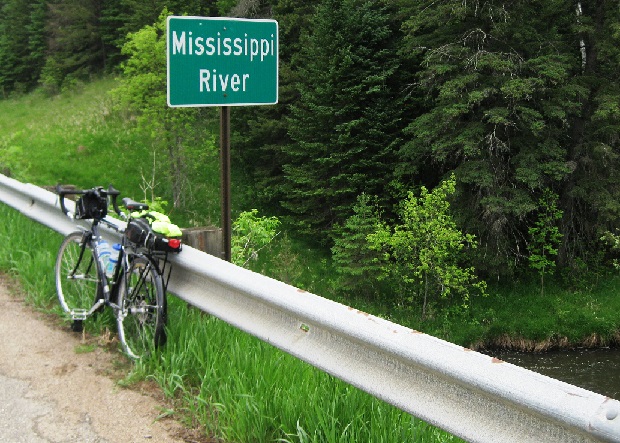 One of the many river crossings as the MRT makes a north, east, south and west arc through the Minnesota’s wooded forests.

The Mississippi River Trail starts right here in Minnesota!  This is a world-class bicycle route that originates and follows the river from its headwaters starting in Itasca State Park, it continues through ten states to the Gulf of Mexico. It is a 3,000-mile network of bicycle-friendly roads and multi-use paths that provides a cross-section of America.  Also known as U.S. Bike Route #45, when complete will help the U.S. Bicycle Route System encompass more than 50,000 miles of routes and create amazing new opportunities for cross-country travel, regional bicycle touring, and commuting by bicycle.  To date, 8,992 miles of U.S. Bicycle Routes have been established in 18 states. 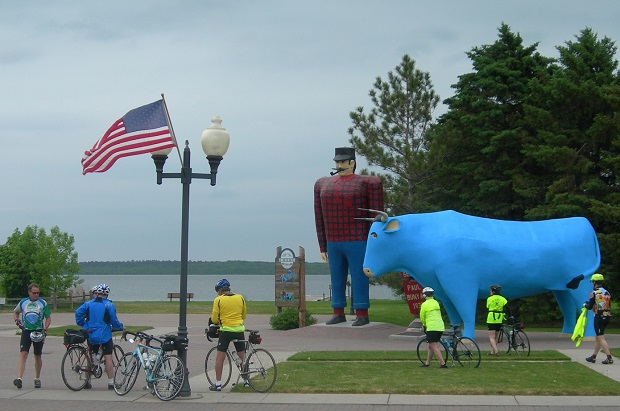 Bikers visiting Paul Bunyan and Babe, in the first city on the Mississppi River, Bemidji.

On this Headwaters to Hills Bicycle Tour we will also be celebrating with the towns we travel through, they include:

Here is your chance to fall in love and celebrate the MRT, the river and its history that we will uncover along the way – Join Wahoo Adventures and several State Agencies this summer for this fun Headwaters to Hill Tour – with proceeds benefiting the Bicycle Alliance of Minnesota.

Find more information about this bicycle adventure, go to the Headwaters-to-Hills Tour.

I really enjoyed exploring Minnesota’s North Shore Bicycle Tour, circling through the Arrowhead Region of the state. Operated by Bike Tour Vacation, I found the this ride on the Events calendar at HaveFunBiking.com and it turned out to be the highlight of my summer. 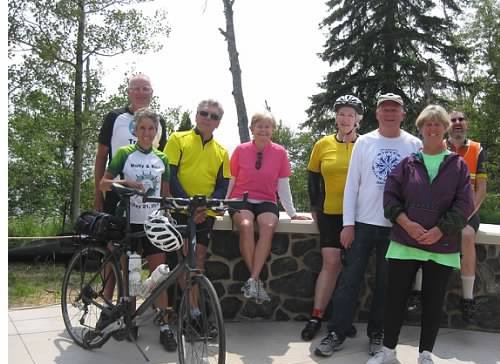 If they hadn’t listed the tour I probably would not have found it on my own, since it is a the tour company is out of Michigan.  On this remarkable ride we had only seven bicyclists to two guides and virtually all expenses were included in the lodge to lodge tour fee on this trip, except two lunches.

Because of the abundant restaurants options in a couple areas of the trip, the leaders wanted us to explore and compare.  The owner of the company, Jim was one of the leaders so he could immediately fix any unexpected situations.

One guide bicycled with us and the other drove the SAG (support and gear) vehicle. Since the gear trailer was pulled by the SAG van, it was easy to store extra clothes at the next rest stop or pick up needed supplies from one’s bag.  The weather and temperatures were almost perfect with the only heavy rain one night, this was after all the riders were in. 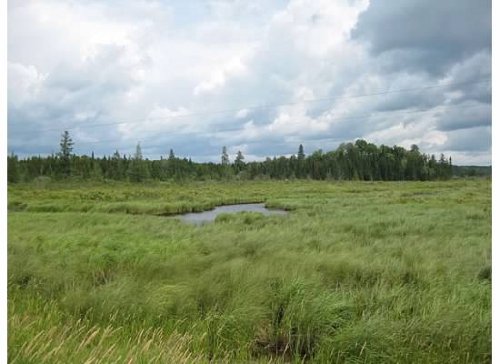 Landscape scenery on the way to Virginia

Sunday afternoon we met in Duluth, Minn. at the Edgewater Inn. Then, Monday morning everyone was shuttled north of town to Island Lake to begin riding.  This shaved off 20 miles of bicycling and a huge climb.  Those of us who aren’t good hill climbers appreciated this. Along the journey on the first day we spent much of the route on quiet roads bicycling through woods areas arriving in Virginia for the night. 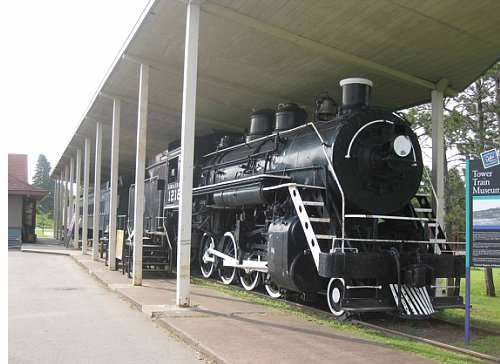 One of the highlights here on the Iron Trail was eating dinner in “jail.” This is the name of the party room, with bars on it, in a local Mexican restaurant in Virginia. The next morning, when breakfast  at the hotel turned out to be just Danish and coffee our tour leader took everyone to a local café for a real iron miners breakfast. 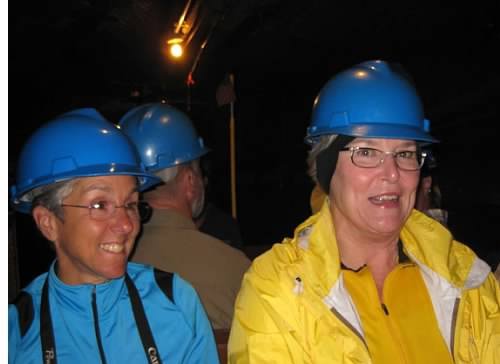 After leaving Virginia on the Mesabi Trail and passing through Gilbert and Biwabic, the highlight of Tuesday was a visit to Soudan Underground Mine State Park.  Arriving about three in the afternoon, the Underground  Mine here was donated to the state of Minnesota after it closed in 1965. Today, visitors can don a hard hat and pretend to be miners.  Our tour began with a short film and safety warnings. Then visitors board a rickety old elevator and descend one-half mile down where a shuttle train transported everyone another three-quarters of a mile to where miners once worked to extract the iron ore. After the group acclimated to the surroundings the guide turned out the lights for a few minutes to allow visitors the experience of what early mining was like – when they worked in the darkness.  Fortunately, he lit a candle and explained more of the mining process with some light.  Those who are claustrophobic or afraid of the dark may want to avoid this mine tour. 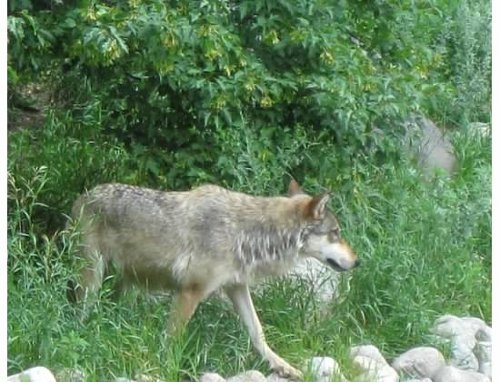 Behind a glass viewing station, at the International Wolf Center in Ely, a wolf roaming the woods

On Wednesday, we rode a short 30 miles from our overnight at Boise Forte Casino, in Tower, to Ely.  This gave us all a full afternoon to try out the cuisine of Ely and explore the town. I enjoyed a visit to the International Wolf Center and finding several interesting murals in town. 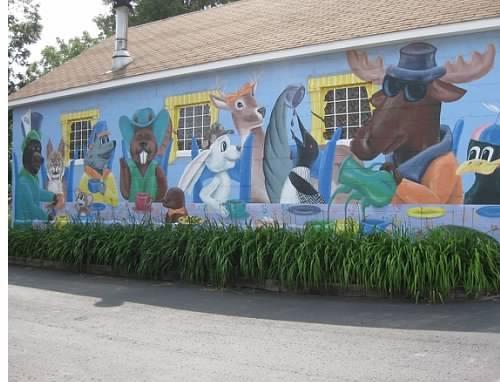 This mural in Ely is a MN interpretation of the Alice in Wonderland tea party using wildlife such as moose, deer and beaver.

Thursday was a long 70 mile bike ride to Beaver Bay. Half the riders started at 7:30 a.m. with one guide. The rest were shuttled the first 20 miles for a shorter distance.  This allowed the slower riders to get a head start on the fast riders, so we all arrived for lunch about the same time.  One of the fun parts of the day along this section of the tour was the 10% downhill grade into Tettegouche State Park, along the shoreline of Lake Superior. 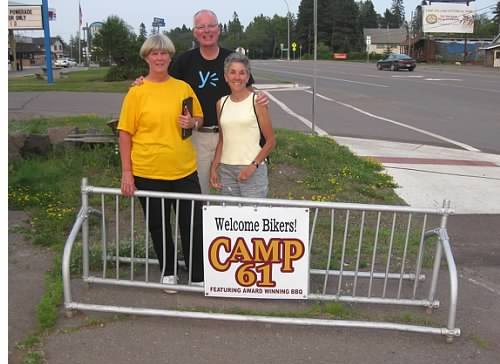 Several of our group posed with the sign here in downtown Beaver Bay, along Highway 61 Bay.

On Friday, we started out riding a 15 mile stretch of the Gitchi Gami Trail out of Beaver Bay. The trail meanders along the undulating shoreline past the Split Rock Lighthouse and then to Gooseberry Falls State Parks. Some stretches along the shore had incredible views of Lake Superior.  After going through Gooseberry Falls most of the route to Two Harbors was riding the shoulder lane along Highway 61, with a posted speed limit for traffic set 50 MPH. After Two Harbors, the route follows the North Shore Road.  This area had many dining options. Then we picked up the Lake walk in Duluth, back to the Edgewater.

I can’t wait to see what rides will be listed on the HaveFunBiking.com Events Calendar for next year – Thanks!