Today’s Memorial Day bike pic, we look at the fun everyone is still having on this holiday weekend, on September 2nd. In this photo, we captured this group of touring cyclist riding though Hopkins on a Hiawathatha Bicycle Club bike ride.

Get into your bike ride planning mode to continue your summer fun and your #NextBikeAdventure. View all the fun ideas and HaveFunBiking Destinations in both the Minnesota Bike/Hike Guide and the Iowa Bike Guide.

Thanks for viewing our ‘Monday’ Bike Pic

Now, rolling into our 14th year as a bicycle media, our goal is to continue to encourage more people to bike, while showcasing unforgettable places to ride. As we search for more fun photos worth a grin, share your stories so more can find their next adventure. Then, while out there if you see us along a paved or mountain bike trail, be prepared to smile. You never know where our cameras will be and what we will post next!

Do you have a fun photo of yourself or someone you know that you would like to see us publish? If so, please send it our way and we may use it. Send your picture(s) to [email protected] with a brief caption (of each), including who is in the photo (if you know?) and where it was taken. Photo(s) should be at least 900 pixels wide for us to use them. If we use your photo, you will receive photo credit and an acknowledgment on Facebook and Instagram.

As HaveFunBiking continues to encourage more people to ride, please see our media’s to find your next adventure. We are proud of the updated – At-a-Glance information and maps we are known for in the HFB Destination section on our website and in the guide. Now, as the Bike/Hike Guide goes into its seventh year of production, we are adding a whole new dimension of bicycle tourism information available for mobile devices where you may see some additional bike pics – maybe of yourself so.

Bookmark HaveFunBiking.com and find your next adventure – we may capture you in one of the next photos we post.

The MN High School Cycling League returns to Austin, MN this Saturday and Sunday (August 24-25) for an action-packed weekend of mountain bike racing. This will kick off the 2019 racing season for almost 2,000 middle school and high school students throughout Minnesota and Western Wisconsin. 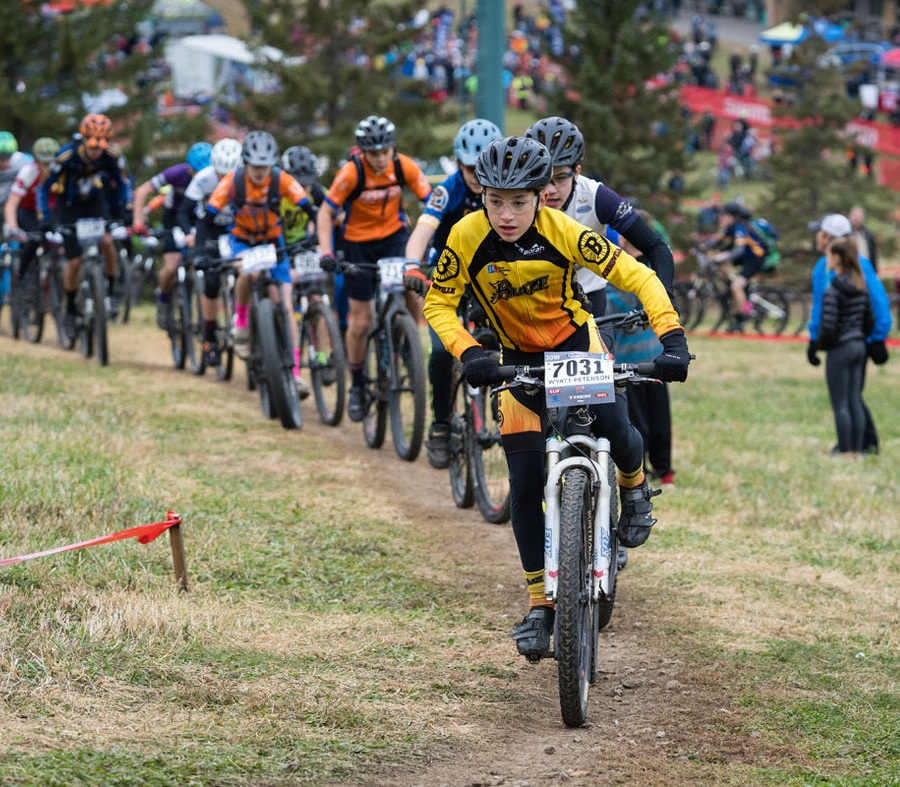 Get ready Minnesota – a new race venue will be added for the Sept. 14-15 race. Each year, the MN League moves their race weekends to different venues across the state. This brings the sport to different locations around the region and to offer new and exciting race opportunities for the students. This year, the League is thrilled to be a part of the Chequamegon Festival the weekend of Sept. 14 and Sept. 15. Working with a variety of partners, including the Chequamegon Festival, a new trail has been built near Stone Lake, WI (Summit Lake Game Farm) that will become an exciting race venue for years to come – and a new mountain bike trail for people to ride and enjoy year-round. A special thanks to Tom Gujer and Chad McDonald for their help to make this trail happen! 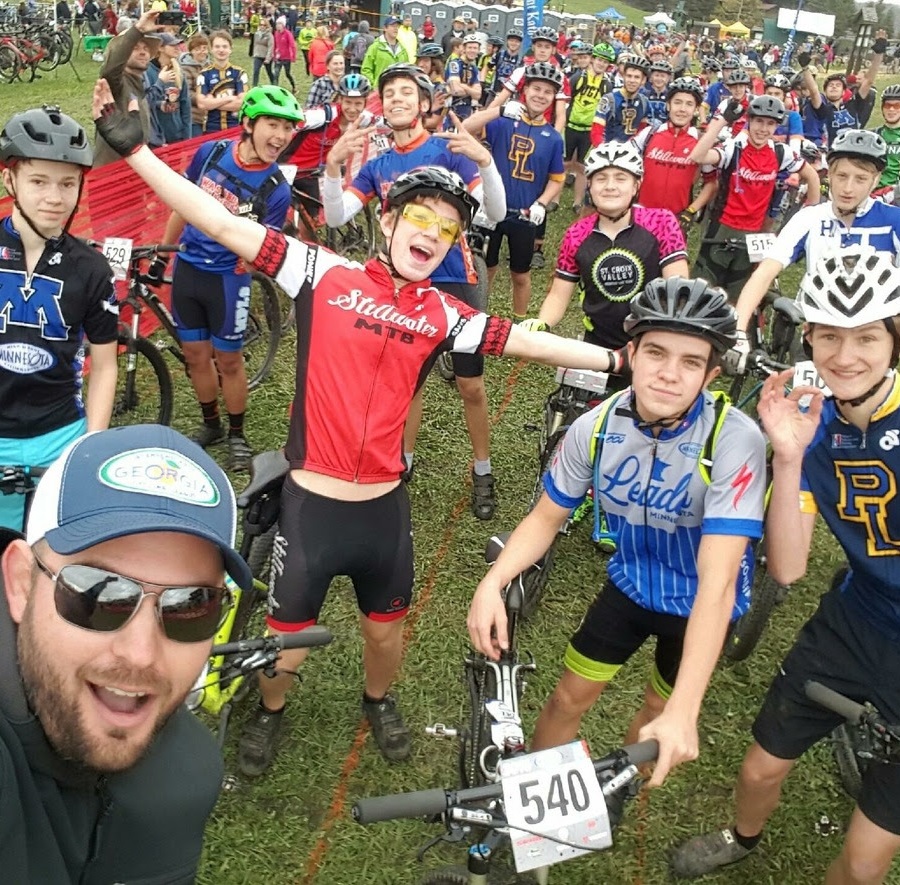 They are all ready for a challenge. Photo Credit: tmbimages.com

As the interest in mountain bike racing has grown across the region there is also an increasing number of younger students interested in riding and racing with the MN League. To accommodate this demand, each MN League team has been given the option of adding in 6th-graders to their middle-school teams. They are thrilled to announce that there are over 160 sixth graders already signed up!

“Last year, due to required race day schedule changes, we had to remove Sunday pre-ride time – this year, we were determined to find a way to bring back the ability for student-athletes to pre-ride and race on the same day,” said Josh Kleve, MN League Director, and Co-Founder. “By shifting the middle school to Saturday, this enabled us to add 6th grade, a long-requested addition, and spread the races out providing a more enjoyable experience for all of our middle school and high school student-athletes.” 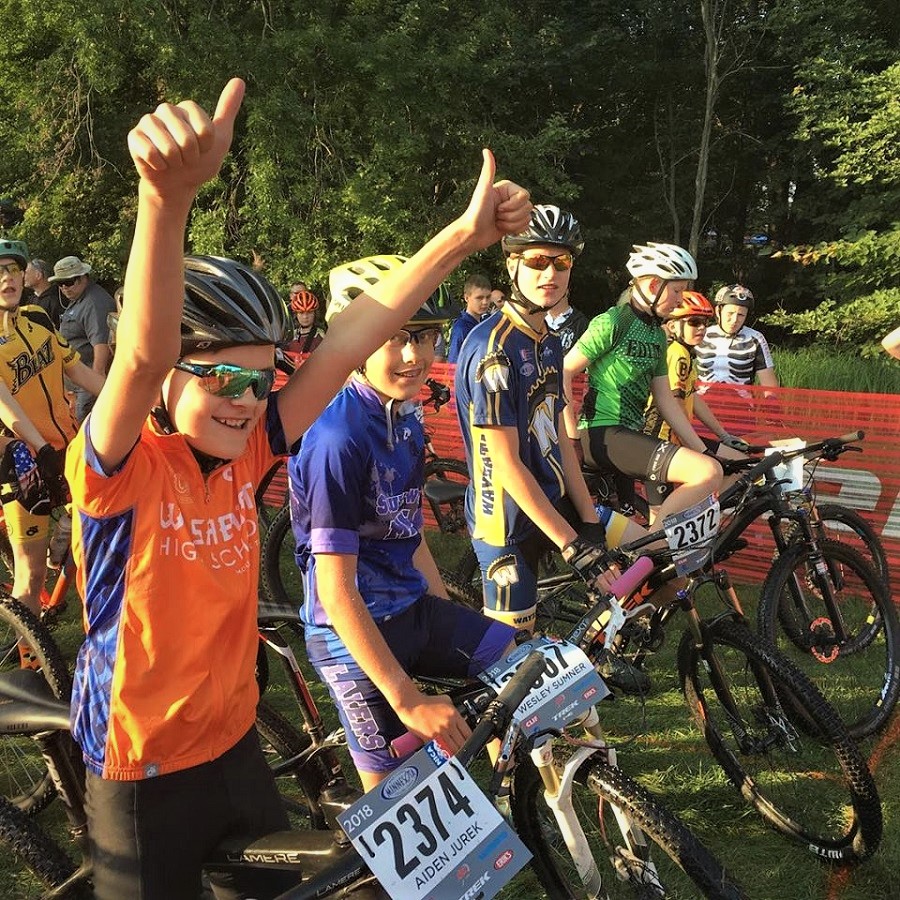 With over 70 teams registered, the MN League has implemented a bye-week schedule to balance the riders across the venues. See the teams competing in Austin, MN.

For the fourth consecutive year, the MN High School Cycling League headed back to Mt. Kato, for Race #7. This State championship race was held in Mankato, MN on Saturday, October 27 and Sunday, October 28, 2018. A favorite course for many young racers, the location, and venue easily accommodated the 3,500+ racers and spectators that attended the event.

For two days, over 1,200 racers from 64 teams across the state of Minnesota, Iowa, North Dakota. South Dakota and Western Wisconsin came together to compete in the final MN HS Cycling League race of the 2018 season.

Since there was a bye-week schedule in place for the season, each of the six previous races had a reduced number of teams competing, resulting in less impact to the event venues and students were able to compete against different racers. But, at this race event, all of the MN League teams were able to compete in one race; resulting in the largest MN League race to date. 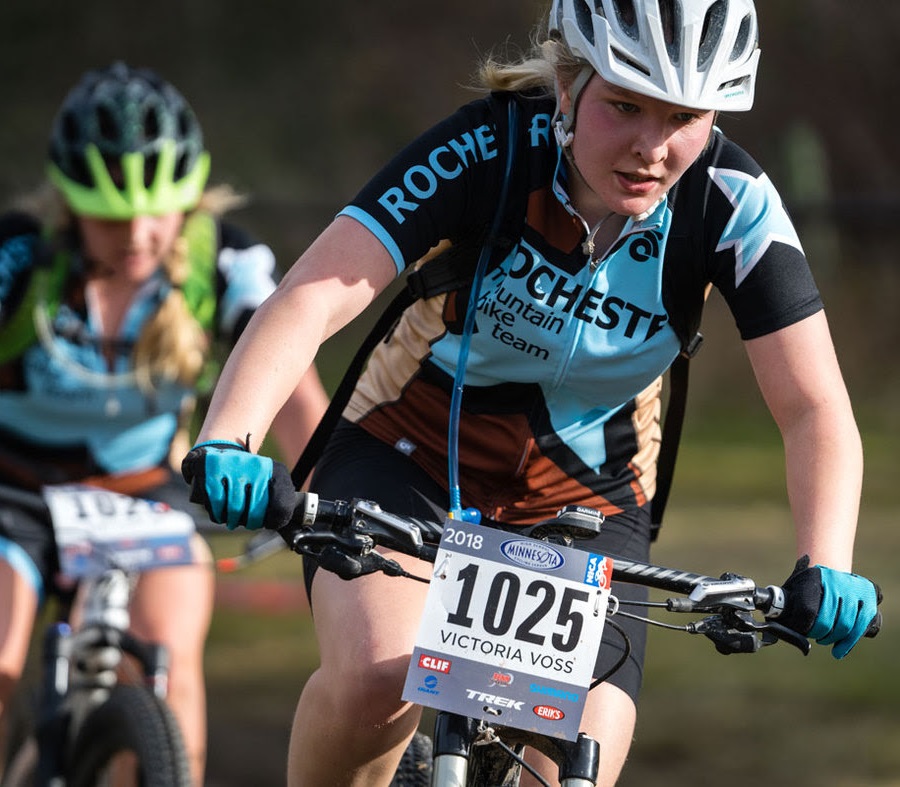 As the team tents went up on Friday evening, the race course and community came together. People were laughing, dogs were barking, cheers of encouragement were heard along with excited voices shouting out greetings – the MN League race venue had arrived in Mankato for two days of action-packed mountain bike racing and not a speck of snow in the forecast.

This year, the weather cooperated, two days of brisk, bright days made for an amazing race weekend. Against a backdrop of brilliant fall colors, racers wound their way up the mountain, and then into the wooded singletrack, to complete a lap in the just under 4-mile course. Based on a rider’s skill level, the number of laps increases, with varsity riders completing four laps or 16-miles.

Get ready Minnesota – racing will be back soon. Watch for news regarding the 2019 racing schedule, later this month. 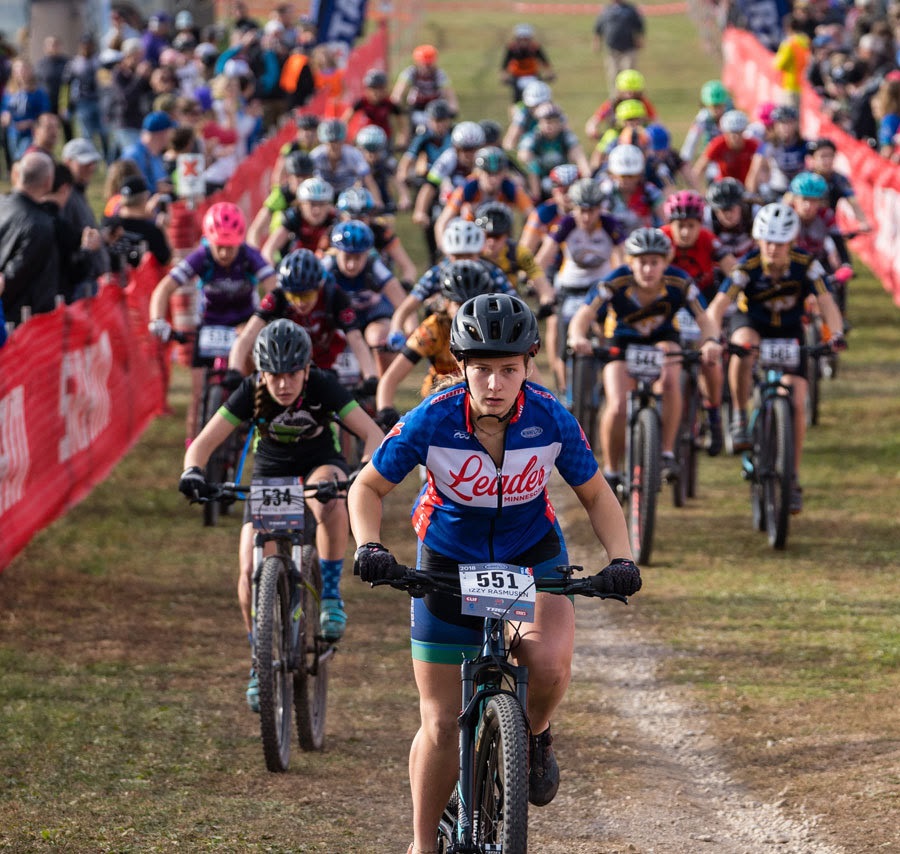 Since it was Halloween weekend; amidst the cheering fans, there were a few interesting characters: a life-size banana, an elephant, Yeti, a giraffe and even a zebra! Tutus were out, tiaras were on helmets and there was even a racer that went by in a full bear costume. 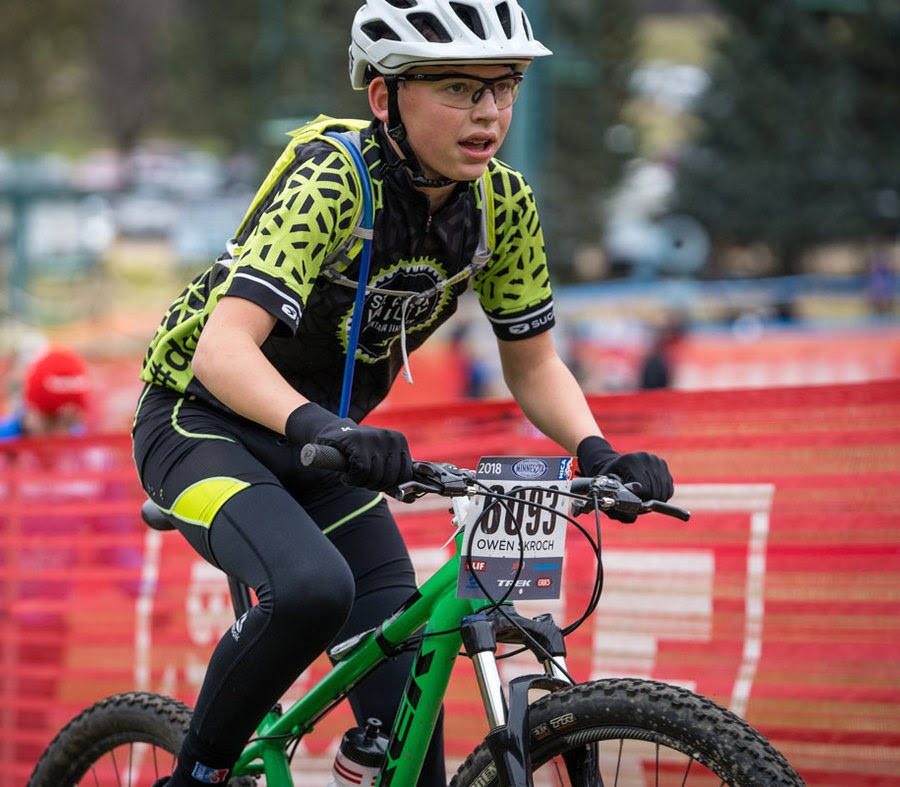 In the Middle School D1 race, Stillwater and Prior Lake almost tied for first place, with a difference of three points. Stillwater secured the first place over Prior Lake and Washburn took home the third place trophy. 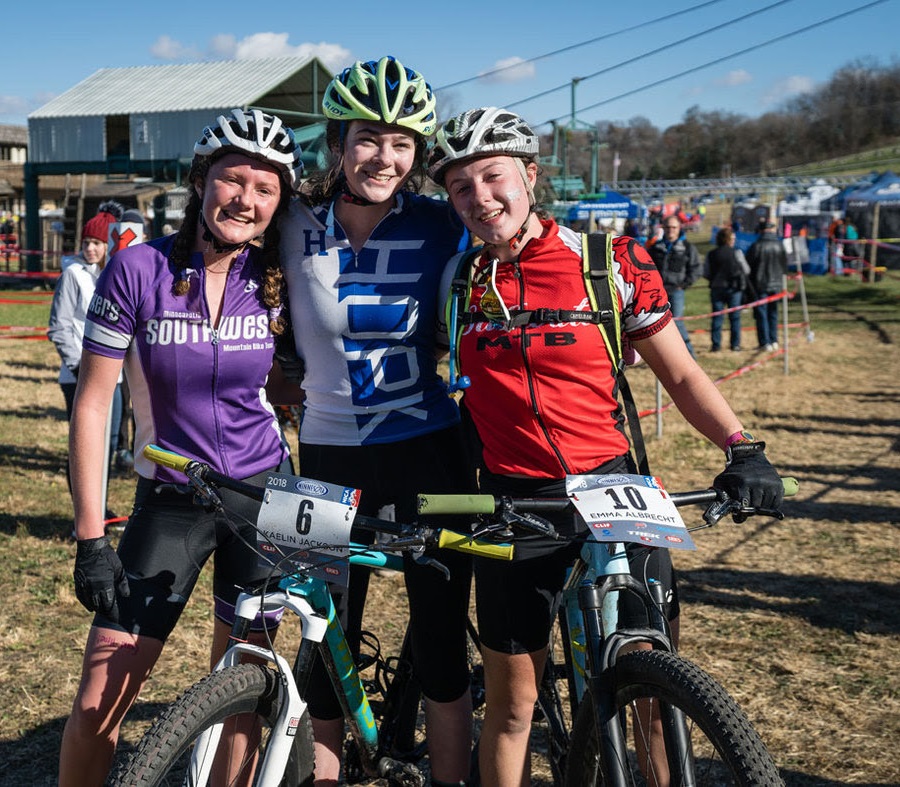 Season overall winners will be announced at the Year End Ceremony on Fri. Nov. 9 at Northrup Auditorium in Minneapolis, MN. Details

The Minnesota High School Cycling League is a state-wide independent activity provider for student-athletes in 7th to 12th grade. Our mission is to build strong bodies, strong minds, and strong character through cycling, regardless of ability level. Each MN League season includes summer programs, a seven-race series, wilderness first aid certification courses and a Spring Leaders’ Summit for training and certification of coaches. The MN League exists by virtue of a range of fundraising activities, as well as generous donors, and MN League and NICA national sponsors. For more information on the MN League, visit minnesotamtb.org.

Here Steve, from Tonka Cycle & Ski in Hopkins, MN is a cyclist’s angel, here helping a rider on a 4th of July bike ride with a tire problem. This photo was taken this year on the Tour D’ Amico where Tonka Cycle was on hand at each of the rest stops to assist riders.

Thanks for viewing the Bike Pic of the Day here at HaveFunBiking.

Now rolling into our 10th year as a bike tourism media, our goal is to continue to encourage more people to bike. While showcasing all the unforgettable places for you to ride. As we continue to showcase more place to have fun we hope the photos we shoot are worth a grin. As you scroll through the information and stories we have posted, enjoy.

Do you have a fun bicycle related photo of yourself or someone you may know that we should post? If so, please send your picture(s) to: [email protected]. Include a brief caption (for each), of who is in the photo (if you know?) and where the picture was taken. Photo(s) should be a minimum of 1,000 pixels wide or larger to be considered. If we do use your photo, you will receive photo credit and acknowledgment on Facebook and Instagram.

So bookmark HaveFunBiking.com and find your next adventure. And don’t forget to smile, while you are riding and having fun. We may capture you in one of our next photos that we post daily.