As you enjoy the fresh fall air while you ride, we hope you have clean biking gloves!

With Fall officially here and some of the best biking ahead, with colorful scenery and mild temperatures, many people are thinking about winter storage preparations. While bike 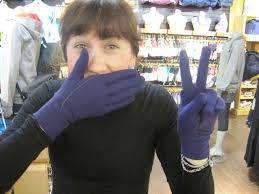 Clean biking gloves are essential so they are not gross or smelly.

maintenance is an important thing to do before storage, taking care of your cycling gear is just as essential especially if things are a bit smelly. Specially bike gloves, which should be cleaned periodically throughout the season,  so they aren’t foul and disgusting.

Not everyone realizes that their riding gloves should be washed occasionally – this includes gloves that have leather or a material that may not seem like it is ‘machine washable’.

Clean biking gloves do more than just grip those handlebars better or reduce vibrations while riding. They also absorb all the sweat and skin cells that come from a rider’s hands. The sweat and skin cells can eventually build up within the gloves and make them smell due to the growth of various bacteria. Therefore, taking care of cycling gloves is something that everyone should do.

When riding, whether racing or for recreation, biking gloves can become quite dirty, stinky and bacteria ridden.

What gets on Typical Biking Gloves? 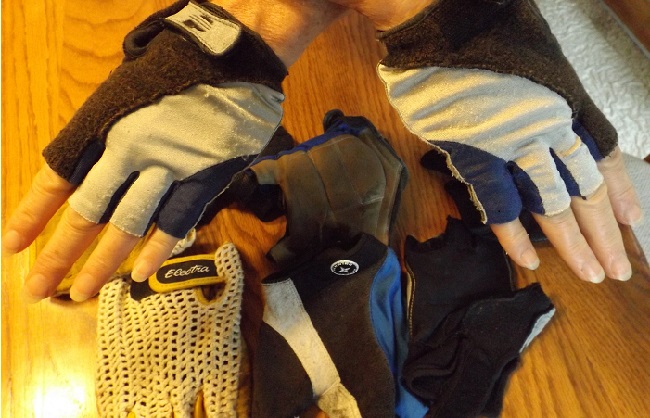 Here is an assortment of clean biking gloves you may have that should be washed periodically to eliminate odors.

Let’s start with the most obvious one. Dirt and bacteria. When a rider puts on their gloves it isn’t likely that they will be taking it off anytime soon. Even if they stop for a drink, you’ll generally find gloves still securely on the rider’s hands. Your hands touch a lot of objects and whatever you can usually find on your hand when out and about, it’s likely to be on your gloves.

Dirt and general bacteria from the great outdoors isn’t the only thing that might end up on gloves. Many riders also use their gloves to rub at chain ring tattoos. Therefore, grease can also adhere to the gloves and be transferred on the handlebars or penetrate into the gloves. For information about how to avoid and deal with grease marks, we have an article that covers that so hopefully grease – on a general outing – won’t be on your gloves.

Additionally, bacteria can come from when riders may cough into their gloves. This means that saliva can also get on the outside of the gloves and stay there.

Another obvious offender is sweat. The cycling gloves help ensure a good and tight grip on the handlebars so the rider always has control of their bicycle. Without gloves, sweat can make handlebars slick. This decreases the degree of safety a rider can have while doing serious biking. The gloves absorb the sweat into the material so it doesn’t cause a problem or irritate the rider as they continue on their journey.

Since the material is easily accessible, as it is on a rider’s hands, riders also tend to use the gloves to wipe sweat from their faces. So while sweat may be in the interior, it also tends to be on the outside as well.

When listing off what can be on biking gloves, snot is not something that readily comes to mind. Why should it? It definitely isn’t pleasing to think about, and definitely makes many people cringe. However, when someone is biking, sweat and a runny nose that comes from exertion, in any weather, can happen.  Unable to reach for a tissue or blow their nose, many riders use their gloves or sleeves to quickly deal with a dripping nose.

Sweat makes the interior and exterior of the gloves moist. When gloves are placed in darkness, it becomes the ultimate breeding ground for bacteria to quickly multiply. This creates the smell that gloves can emit. If not taken care of properly over time, the smell can be difficult to remove.

So before you dig into your bike bag for a pair of gloves or borrow someone else’s, remember this. You never know what another person’s biking gloves have been through. It also means that washing your own biking gloves should be seen as a regular practice rather than only washing them once during the biking season.

Learn how to clean your gloves – no matter what material – by looking at our easy step-by-step article.