Last November we first heard about MagLOCK pedals – clipless mountain bike pedals that use magnets instead of springs to keep the rider’s feet attached, and that can also be used as regular platform pedals. The product fell short of its crowdfunding goal, perhaps because the pedals were kind of clunky, but MagLOCK designer Dave Williams is now back on Kickstarter with a sleeker, lighter and less expensive version.

Unlike their predecessors, the new pedals have a low-profile cutaway design, with a body made from anodized aluminum. They still contain rare earth magnets that engage a steel cleat on the bottom of the rider’s cycling shoe, although those magnets are now cylindrical. 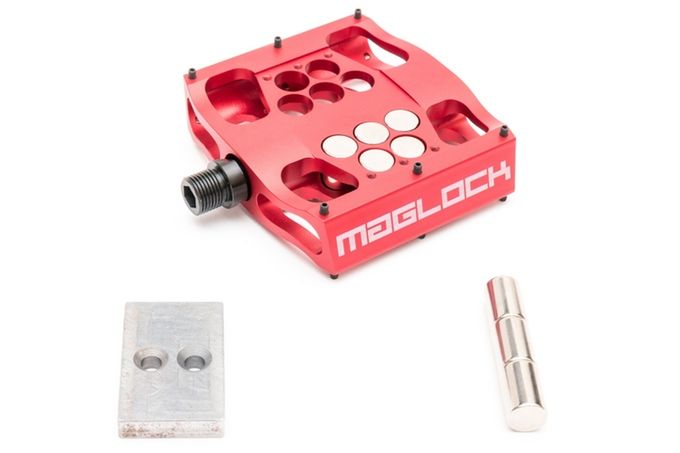 The amount of attraction between MagLOCK pedals and cleats can be adjusted by adding or removing magnets an the weight of the system is now down from 1,540 grams to 974 g per pair of MagLOCK pedals.
(Credit: MagLOCK)

As before, the amount of attraction between pedal and cleat – and thus the degree of shoe retention on the pedal – can be adjusted by adding or removing magnets via a stainless steel cover (the rider can release their foot simply by pronating it sideways). A maximum attractive force of 35 lb (16 kg) is possible, which is less than the original model’s 50 lb (23 kg), although Williams claims that it’s still sufficient to keep one’s feet in place even on rough terrain.

The weight of the system is now down from 1,540 grams to 974 g per pair of MagLOCK pedals. By contrast, a pair of Shimano M545 pedals (which combine a platform and an SPD retention mechanism) weigh in at 567 g. According to Dave, however, MagLOCKs allow for more foot-float than SPDs, are easier to engage, and should be less intimidating to riders who are new to foot retention systems.

And yes, they’re cheaper than the old version. Whereas pledge levels for the originals started at US$175, you can currently get a pair of the new ones for $120 – assuming they reach production.