For many kids, that first bike is the first taste of freedom. For lower-income kids, where transportation may be an everyday issue, that bike can mean so much more.

In the Twin Cities, Free Bikes 4 Kidz collects donated bikes, cleans and repairs them, and gives them to families who otherwise couldn’t afford one. 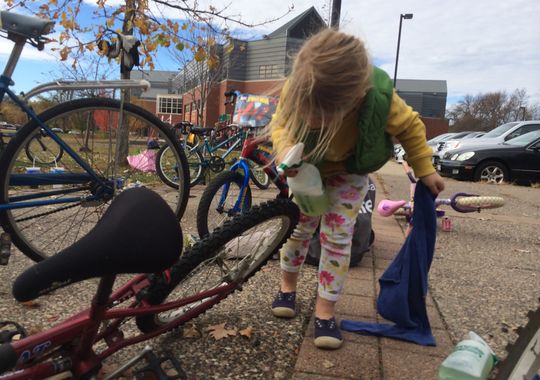 Spritzing the tires in preparation for Make A Difference Day. (Photo: Terry Esau)

Several years ago, self-described “bikeaholic” and organization founder Terry Esau heard about a family in need. He asked fellow enthusiasts if they had bikes they weren’t using anymore. He quickly found there’s an unused or outgrown bike in just about every garage.

On last October’s Make A Difference Day, the group decided to do something a little different. “One of my visions is to try to get more students involved in the process of giving bikes,” Esau says. 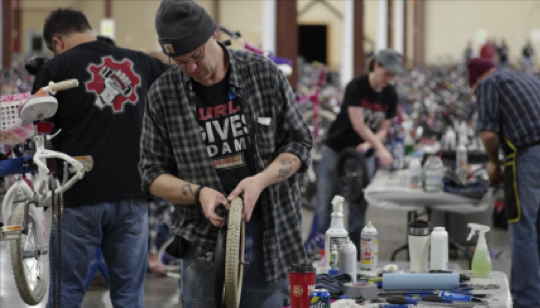 “It’s a really wonderful way to pull this more into a grass-roots opportunity, and kids get an opportunity to provide a benefit to community,” she says.

The schoolchildren collected 150 bikes within three hours on Make A Difference Day, and organizers hope to expand the event to more schools this year. The group works with about 100 non-profits, community organizations, schools and faith-based organizations to distribute the bikes in early December.

One partner organization is the Early Head Start Program in Ramsey County, which delivers bikes to families who are mainly refugees from East Africa and southeast Asia.

“It’s adorable to see them get their bikes,” says Molly Hey, a Head Start home visitor. “It’s a great family experience to bike together.”

The only problem with the bike delivery is that it happens in winter.

“We have a lot of pictures of families in the winter with their bikes,” she says, “with 2 feet of snow.” 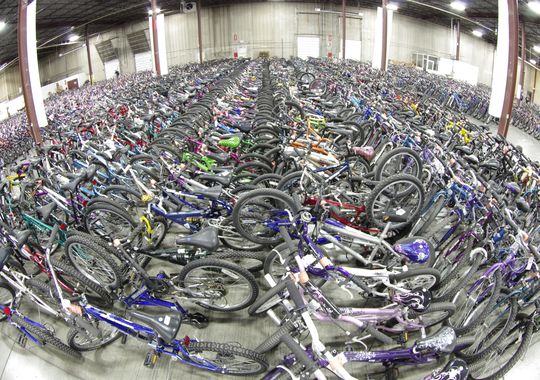 Here in a Northeast Minneapolis warehouse , over 5,000 bikes were collected, cleaned and/or repaired for the 2014 program. (Photo: Terry Esau)

About Make A Difference Day

Make A Difference Day, the nation’s largest annual day of volunteering, is a USA TODAY initiative, backed by Gannett Co. in collaboration with Points of Light and supported by Newman’s Own.