More than a 100 people living in the Minnesota cities of Hopkins, Brooklyn Center, Brooklyn Park, and St. Louis Park took part in a series of free “earn-a-bike” and “learn-to-ride” classes in 2015.

According to the Hennepin County “Get out – Get Active” newsletter participants in the earn-a-bike program learned: basic bike repair skills; gained exposure to bike safety; worked together as a team to repair bikes; and got a bike to keep at the end of the program. Learn-to-ride classes engaged adults who never learned to ride a bike, or who had learned but lost the basic techniques of riding a bicycle. 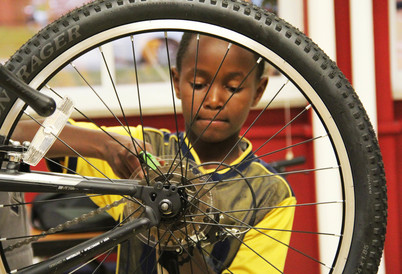 The classes in the four cities were funded by Active Living Hennepin County (through the SHIP program). Directing the efforts of the program was done by the nonprofit Cycles for Change, who’s goal was to increase bike access and education in communities of color and low to moderate income communities. One exciting outcome is that earn-a-bike graduates in Hopkins have formed a bike club and have continued to ride together and to discuss important issues about biking and bike safety in their city.