Is Halloween one of your favorite times of the year?? The new #foreverhalloween stamp will kick off a run celebration for the season of pumpkins and trick-or-treaters! #onlyinmn #halloweencapital #nextadventure #visitanoka #nextbikeadventure #halloween #halloweenfun

If Halloween is one of your favorite times of the year, get ready for the premier and unveiling of the new Forever Halloween Postage Stamp! This Forever Halloween event, in Anoka, MN,  kicks off a fun season of pumpkins and trick or treaters in the Halloween Capital of the World.  Then, this is followed by several weeks of ghosts and goblin fun.  All of this is the lead up to the great hallowed event on October 31st.  With hotel accommodations easily available around the nine Twin Cities Gateway communities, it’s a quick drive by car or bike ride to all the 2016 Spooktakular Events.

This year’s events begin September 29th with the unveiling of the new official ‘Forever Halloween’ postage stamp. Then, the fun really heats up on the weekend of October 14th  because of the Pumpkin Bowl, the famous Orange Tie Ball, and a medallion hunt. The following week take a tour of the decorated spooky homes, participate in the Annual Gray Ghost 5K, and enjoy the Grand Day Parade celebrating all things Halloween. Located in the northern Twin Cities Metro community of Anoka, it’s the 96th year the town has hosted this event.

Through the years Anoka’s Halloween celebration prides itself in offering world class fun. Afterwards, in the last weekend in October, participation in the night parade and Grand Day parade has grown to include floats and marching bands from all over the Midwest. In addition, the original concept of having costumed local student’s parade down Main Street, hasn’t changed a bit.

Forever Halloween Unveiling to Kick Off the Spooky Season 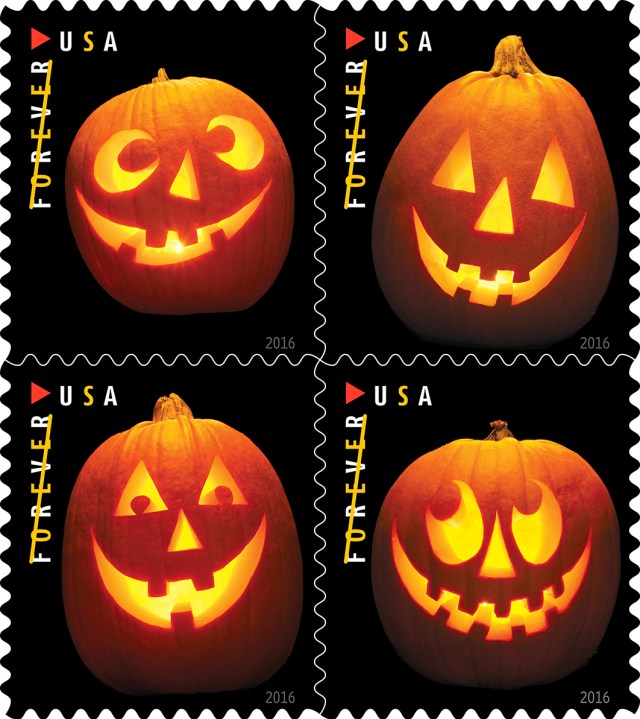 Here is the new Forever Halloween stamp that kicks off the Anoka, MN – Halloween Capitol of the World celebrations.

Join the fun as the Unites States Postal Service proudly unveils the first day issue of the first official 2016 Forever Halloween stamp. This takes place in the city of Anoka. The event, on September 29th, will take place at River Plaza (the Old City Hall) on 1st Ave N. The event starts at 10:30 a.m. for a Plaza Gathering. Then, at 11 a.m. the Ceremony and Stamp Unveiling will take place. Afterwards, since you’re in the area anyway for the event, you might want to pick up some Halloween themed post cards. The fun post cards available feature the upcoming events that you can mail to your friends. Also, don’t forget the new stamps!

Ramp Up Halloween with the Pumpkin Bowl and Orange Tie Ball

Are you ready for some Halloween themed football? Friday evening, October 14th, the Anoka High School football team plays their rival Chanplin, located on the other side of the Mississippi River Trail. Then, on Saturday, tour the decorated homes around Anoka before the annual Orange Tie Ball begins! The fun evening will include dinner, dance, raffles & silent auctions, and more. All proceeds go to the Anoka area students scholarship fund. If you have any questions, contact: orangetieball@gmail.com.

Then, with a wine tasting event and more decorated homes to see, all of it leads to the grand finale. The grand finale of Anoka’s 2016 Forever Halloween season begins the last Friday in October with a Big Parade of Little People. This parade showcases the local school children dressed in their best costumes. Join the fun by watching the parade that started this event ninety-six years ago. 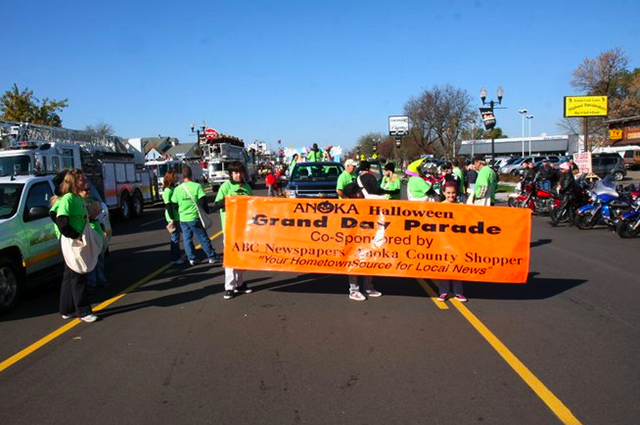 The finale of the Halloween Capitol of the World is the Grand Day Parade – the largest in the state.

Then, on Saturday, enter the Halloween Gray Ghost 5K Run & 1 Mile Walk. See the flyer for more details. Later in the afternoon, celebrate the Halloween Capital of the World’s™ parade – the largest in the state. During the parade, the T-6 Thunder will showcase a special flyover as the parade begins. Sponsored by Federal Premium, all this and more happens on Main Street and Fifth Avenue, in Anoka, MN at 1 p.m. And there is still more to see and do throughout October if you have the 2016 Anoka, MN Halloween Capital of the World button .

No matter where you are staying in the Twin Cities Greenway, it’s easy and safe to get to the Downtown Anoka events by bike. From Blaine, Coon Rapids, Fridley, Ham Lake, Lino Lakes, Moundsview, New Brighton, and Shoreview, you will find bike friendly routes to easily get there. See all nine Minnesota community maps showing you the trails and bike friendly roads there for a ghoulish time or for exploring anytime throughout the year.