On the front end of a bike/barge trip in the Netherlands earlier this year, I added three days to explore Amsterdam by bike. Taking the extra time was a great choice and using a bike as
my mode of transportation was by far the best way to see the city. This allowed me many opportunities to sample the fare this bike-friendly mecca had to offer. Winging it a bit, I rented one of the locally popular trekking bikes to roam alongside the canals like a true ‘Amsterdammer’, even though I stuck out a bit wearing a bicycle helmet. I was comfortable navigating the bike lanes, even with motor scooters buzzing up from behind and pedestrians
stepping out in front of me. As bikes are an important part of Amsterdam, I felt as though I was a part of the city. 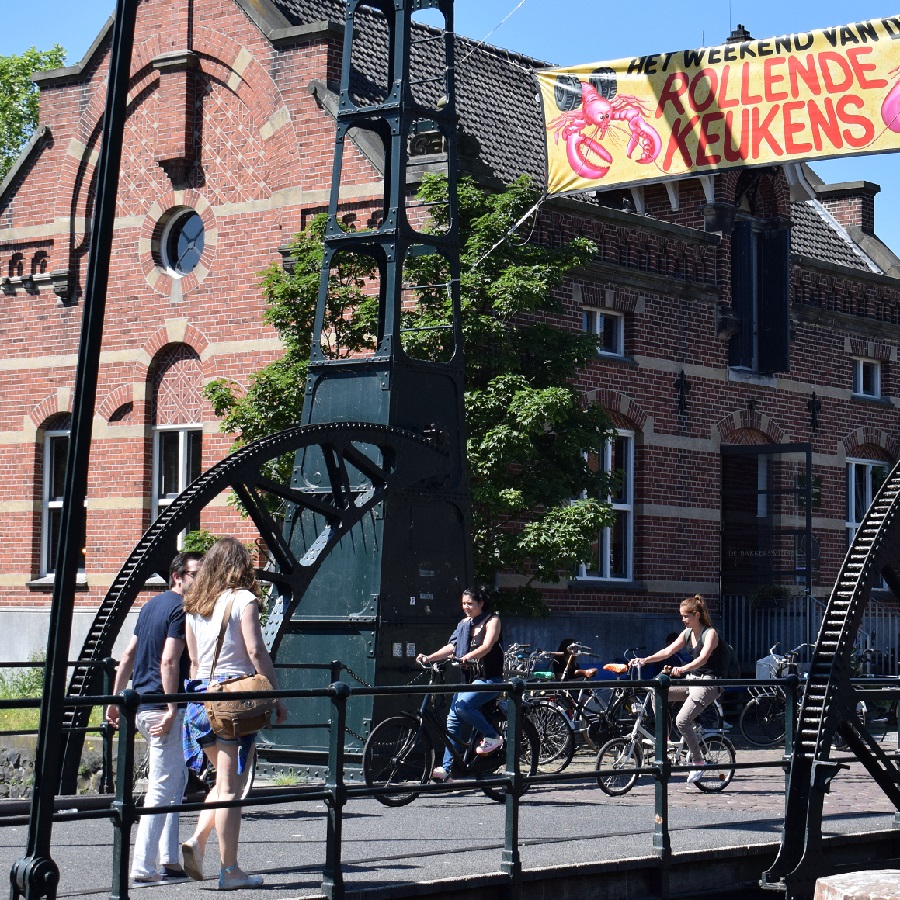 The cool thing about using a bike to get around this city is that you can easily get anywhere quickly. Amsterdam is perfect for bicycles. The city has generous bike paths throughout; some even have specialized traffic lights, with the bicycle symbol illuminated. It seems Amsterdammers go everywhere on their bikes. They attach wagons and load them with cargo – sometimes their children. They also like to chat on their cell phones, run red lights, daringly weave in and out of traffic and the vast majority of them do not wear helmets. Most of
the Dutch bikes all have the same basic look. Old fashion looking, reminiscent of bikes you would see in movies from the 1950s, with wide-set handlebars 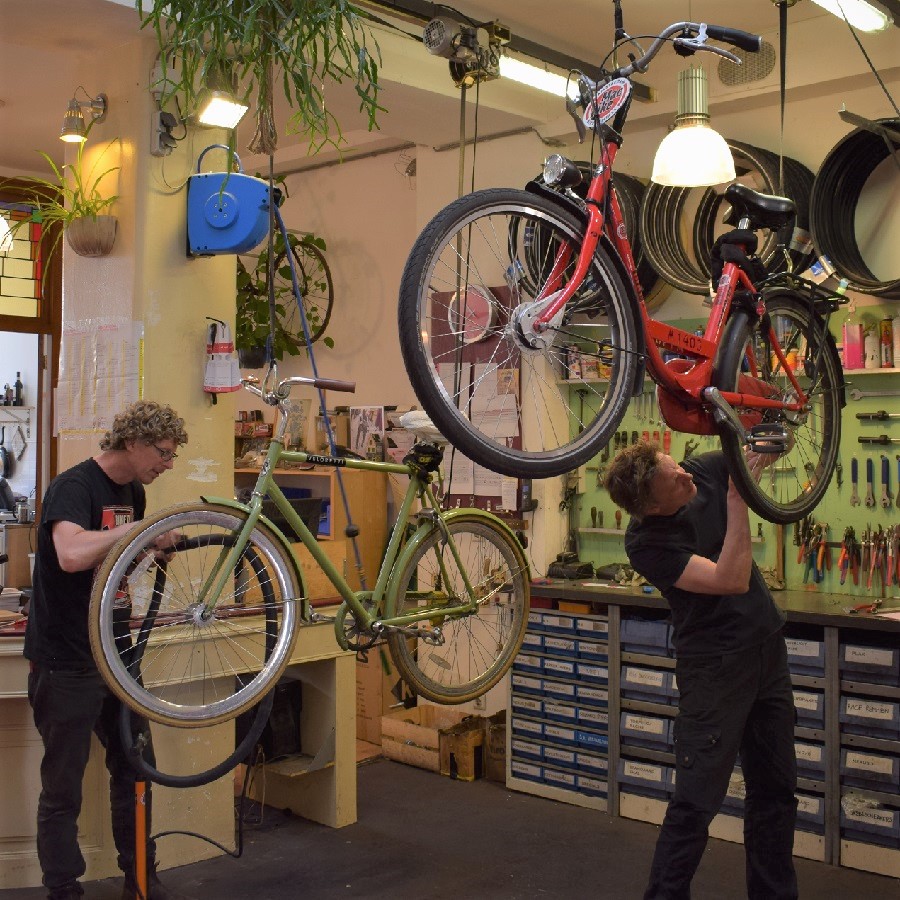 Looking on the web for a rental bike, there seemed to be an ample supply of bikes available around the city. I assumed that I could wait until midmorning to go out and rent a bike for the next couple days, my mistake. Even though it was a midweek day, the best bikes in two shops I stopped at had most of their fleet checked-out. Only a few of their older, well used, bikes remained. Luckily a bike was being returned that fit me well. So I was on my way, taking with me a valuable lesson in renting bikes in a popular tourist area. Unless you can reserve a bike ahead of time, get there early to get a pick of their best. 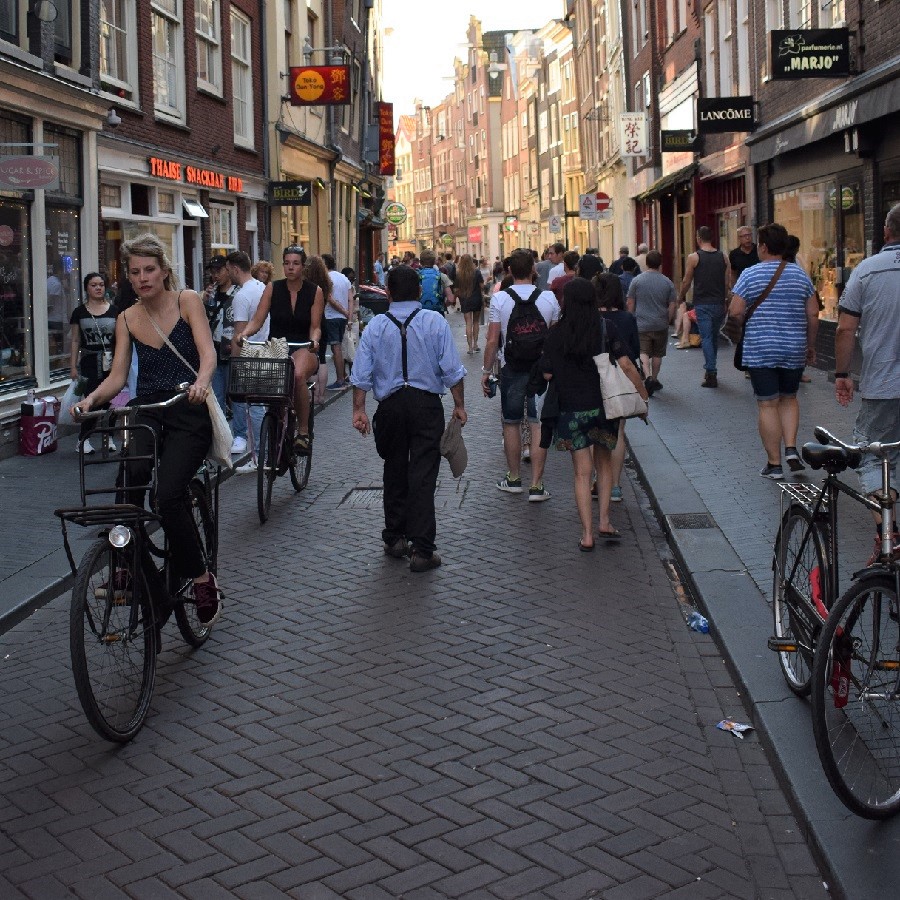 Handy bike maps are available, free, at most hotels and bike rental shops. With a couple of versions in my pocket for occasional review, they worked well for me. Pedaling the streets along the canals, there is way too much for the eye to see, from gorgeous architecture, charming flower boxes, crowded cafés, etc. So forget your iPod, your ride will have its own soundtrack. 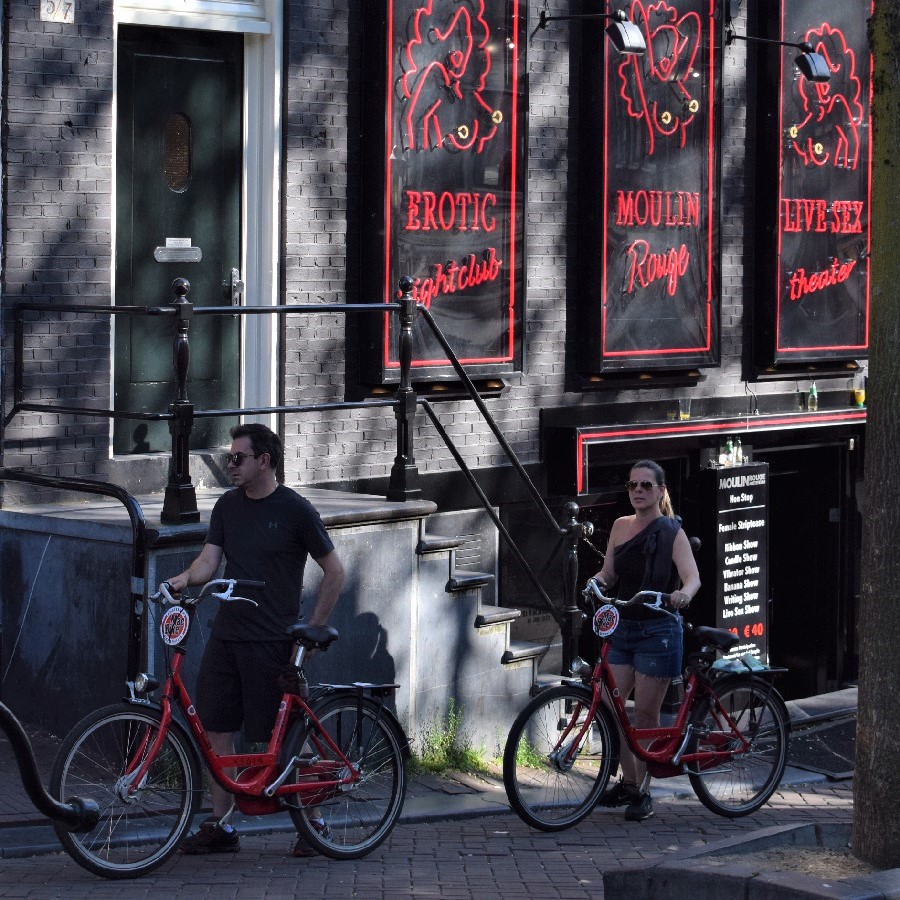 Some of the sounds you may hear include the whirring of a canal boat’s motor, the peal of church chimes, the hum of motor scooters as they zip up behind you triggering your brain to move over to the right to let them by and the tinkle of a bike’s bell, maybe yours? I found that my right hand stayed pretty close to the bell on the bike’s handlebar, warning sightseers to move out of the bike lane. 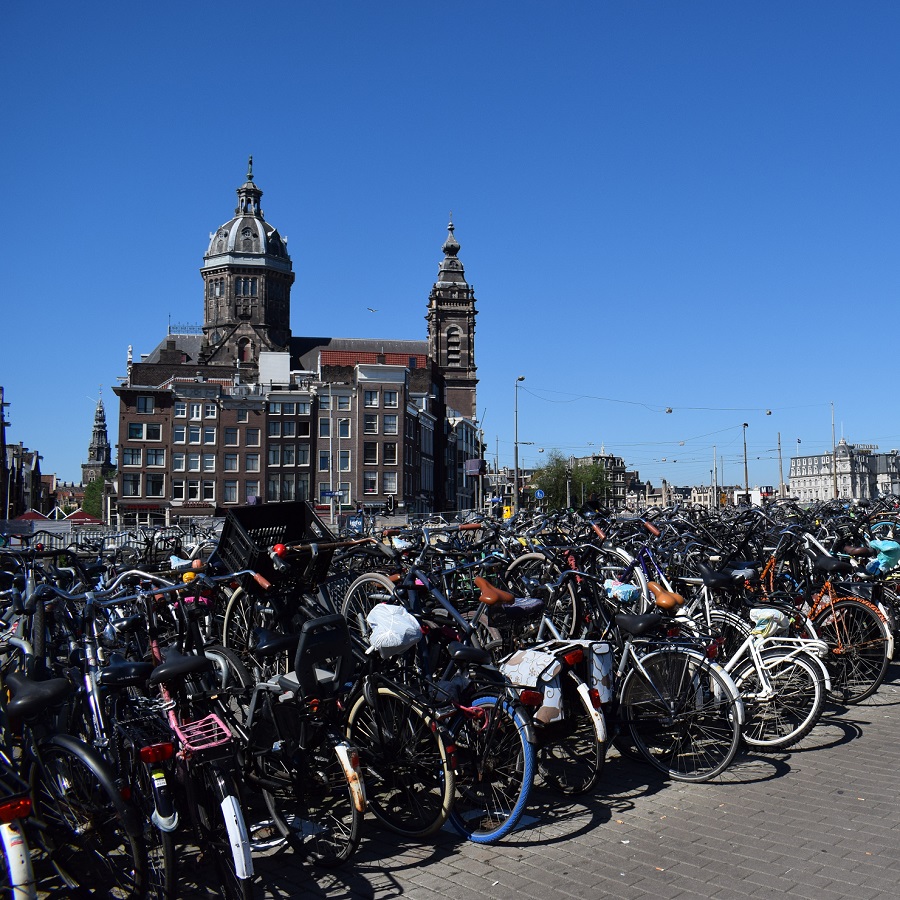 As I mentioned above, I started late checking out a rental bike. Then getting acclimated to the designated bike lanes and tourists walking out in front of me. It was amazing how much I experienced in such a short time. I had no planned route; it was fun to get lost in the city with its maze of streets (straats) and canals (grachts). Of course, those maps in my pocket were
helpful in finding my way back to my hotel. In the first few hours, I rode through Amsterdam’s finest sections including the Jordaan District which could be referred to as the heart of the city. Then I rode past the Anne Frank House where I had a tour scheduled the following day. Next, I passed the house of Rembrandt and then by the awesome architecture of the Rijksmuseum. Finding my way back, I wandered through China Town and then the Red Light District before meeting friends for dinner. 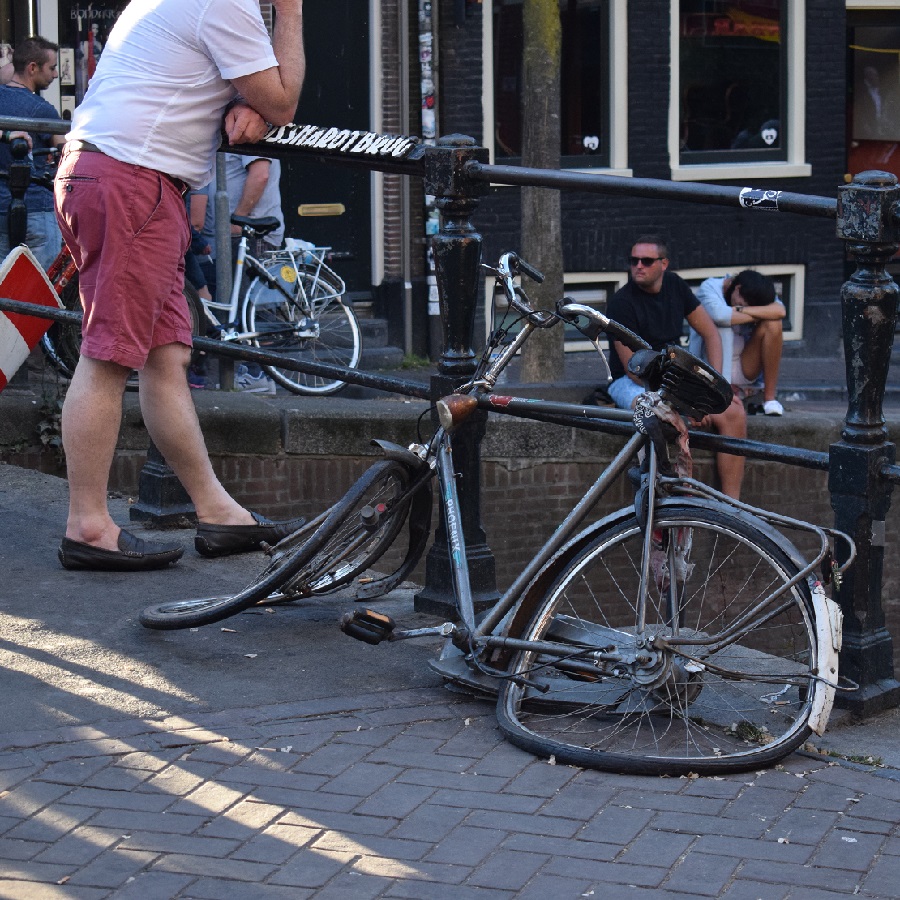 In just a few hours riding my bike around Amsterdam my confidence was high … and so was my thirst. Meeting friends for a beer, several who just arrived in town for the bike/barge cruise, there was some envy as I pulled up on my rental bike. Several asked as I walked in with my helmet still on, “where have you been?” I replied with an accomplished grin, “I’ve biked all over town!” As I shared with them my first day’s adventures in Amsterdam touring the city by bike. 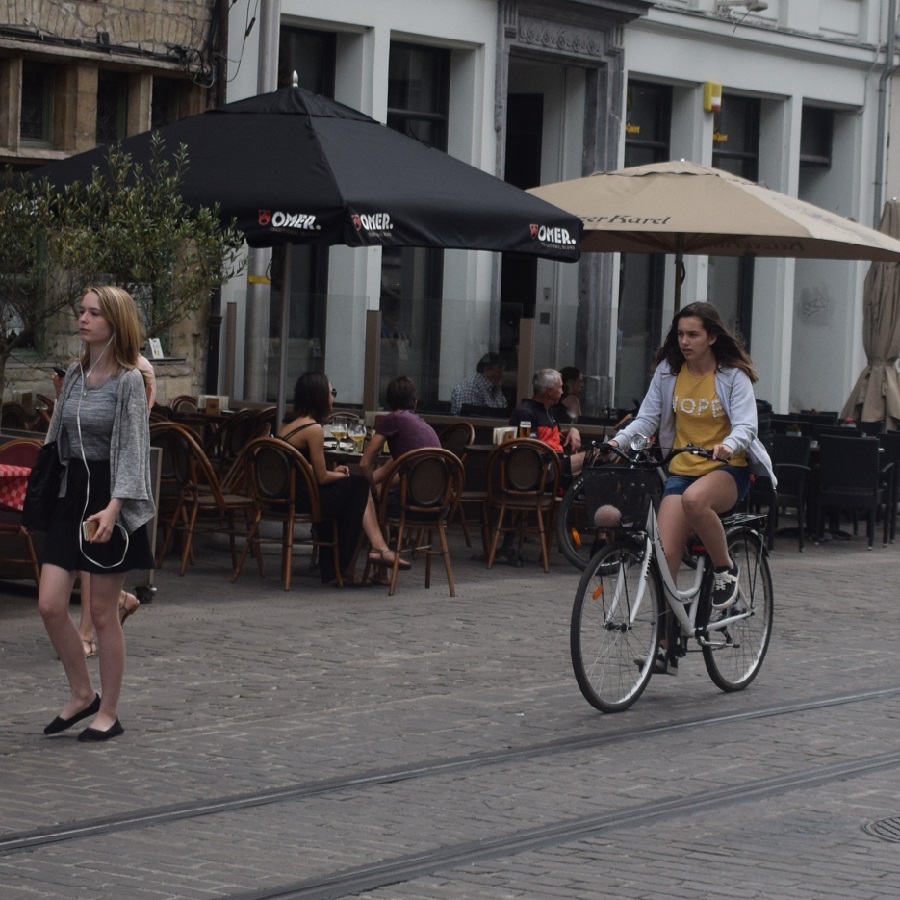 Riding along the street Cafes in Amsterdam

With a loose itinerary, only the Anne Frank Tour scheduled mid-afternoon and dinner plans in the evening, I was off. First, I found myself at Amsterdam’s bustling flower market, where crowds come to buy or just admire a wide array of flowers. After enjoying a cup of coffee and the fragrance of the market, I pedaled across a series of canals to one of the city’s street markets. Here, I found another Dutch treat, a herring stand. In warmer weather vendor stands tend to spring up around the city offering this delicacy. If you appreciate sushi or at least pickled herring, give it a try! You can order herring in a bread roll and eat it like a sandwich. Though “the Amsterdam way” is to eat the herring cold, with only diced onions and pickles as garnish. It was delicious and one of my favorite must-have snacks on the trip. 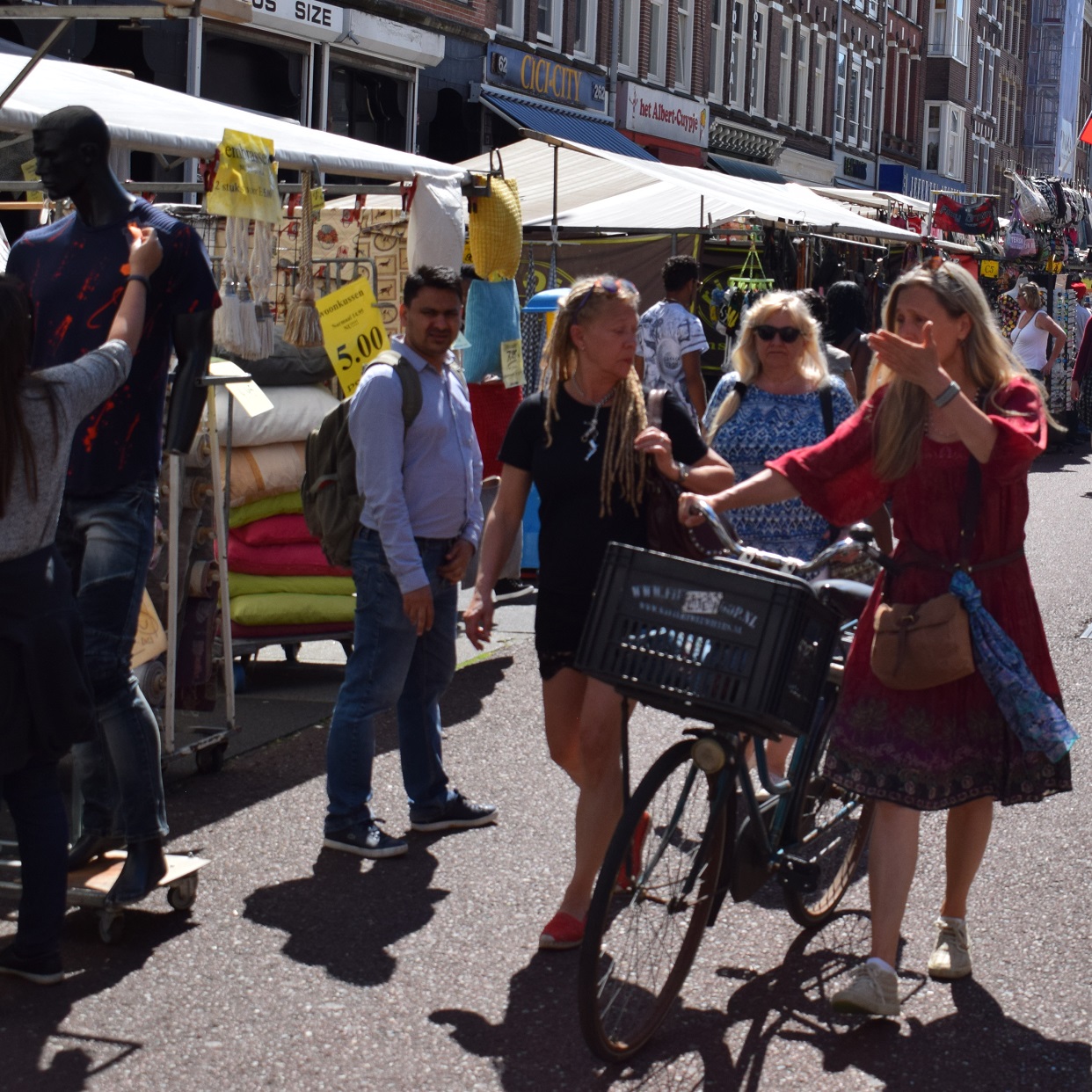 Now pointing my bike towards the Central Station, up through the city center at the river’s edge, I took a ferry across to the north side of Amsterdam. Following the designated bike route several kilometers, I found this part of the city was newer with many parks. 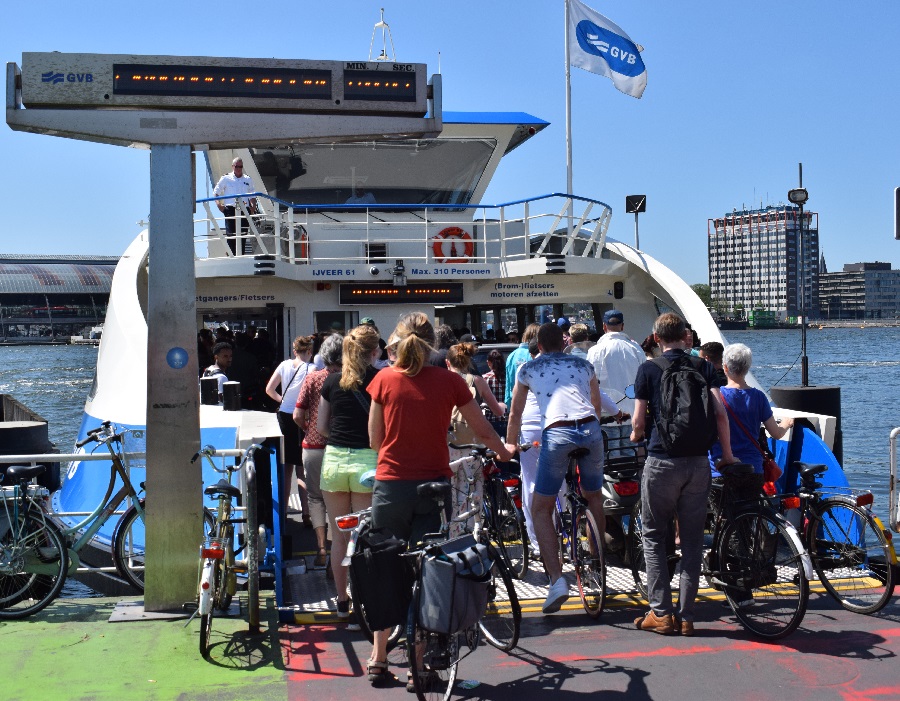 After the Anne Frank tour, which was well worth the extra time of waiting in line, I was off to the east side of Amsterdam. This area, with several blocks of modern architecture, in between canals, gave me another perspective of the city. I planned to take in a few more tours, but I ended up spending more time on the bike. On my way back through the inner city of canals, as late afternoon turned into happy hour along the way, the activities along the sidewalk cafés were entertaining to see.

So in my opinion, assuming you survive the pedestrians wandering out in front of you, biking here is the best. A half million Amsterdammers can’t be wrong. Just be sure to look both
ways before heading out into traffic and don’t be afraid to ring your bell!