It is amazing the things you don’t know about an area you have been pedaling around by bike, for many years. Though you may have wonder why an old building or a street is designed the way it is? But it’s not a top priority and you put off finding the answer. That all changed when I had the opportunity to tag along on a special ride of the Hiawatha Bicycling Club.

The ride called the Magical History Tour was lead and narrated by Joe Metzler, one of the club’s many ride leaders. Joe is an architect and enjoys the history of the building landscape in the Twin Cities. On this 24-mile tour, Joe took us through neighborhoods in southwest Minneapolis, St. Louis Park and Edina. 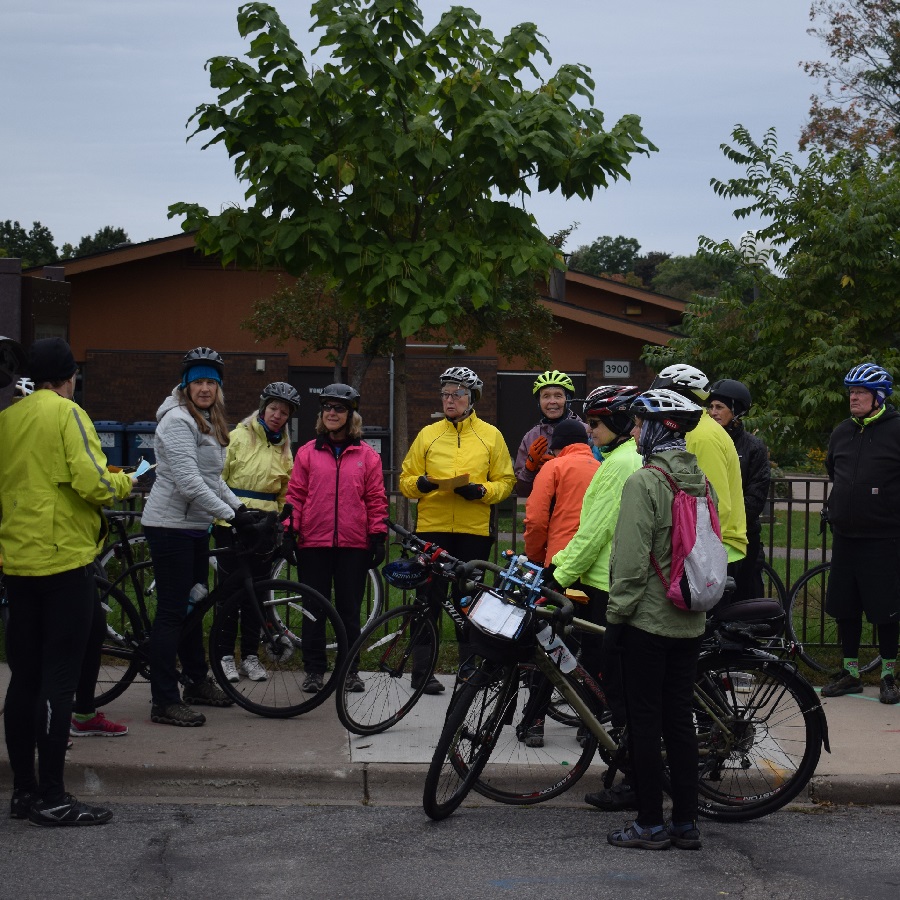 Gather for the Magical History Tour in south Minneapolis.

A History Tour of south Minneapolis

With close to 20 riders on the tour, Joe stopped periodically to share some unique facts about the buildings, streets, and structures along the way. 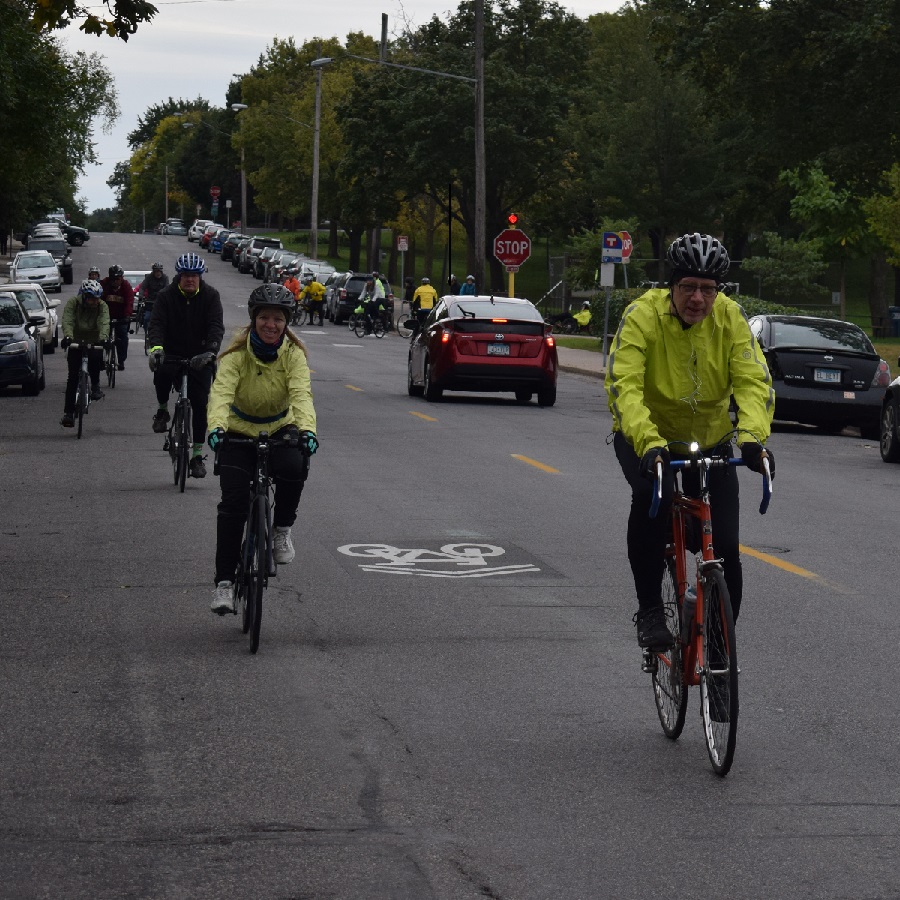 Leaving from the Lyndale Farmstead Park, in south Minneapolis, MN, our first stop was at a porcelain-steel prefabricated building used to sell hamburgers. From there the history tour meandered a few blocks further north, straddling Lake Street to view a 1907 needle manufacturing site, purchased by a greeting card company that renamed the building. Further along, the tour stopped at a fountain on the north end of Lake of the Isle. Originally built to honor fallen horses of World War I, it’s still a mainstay attraction to the parkway. After visiting a few homes, associated with Frank Lloyd Wright, Joe lead us into St. Louis Park.

The first stop on the tour was White Castle #8 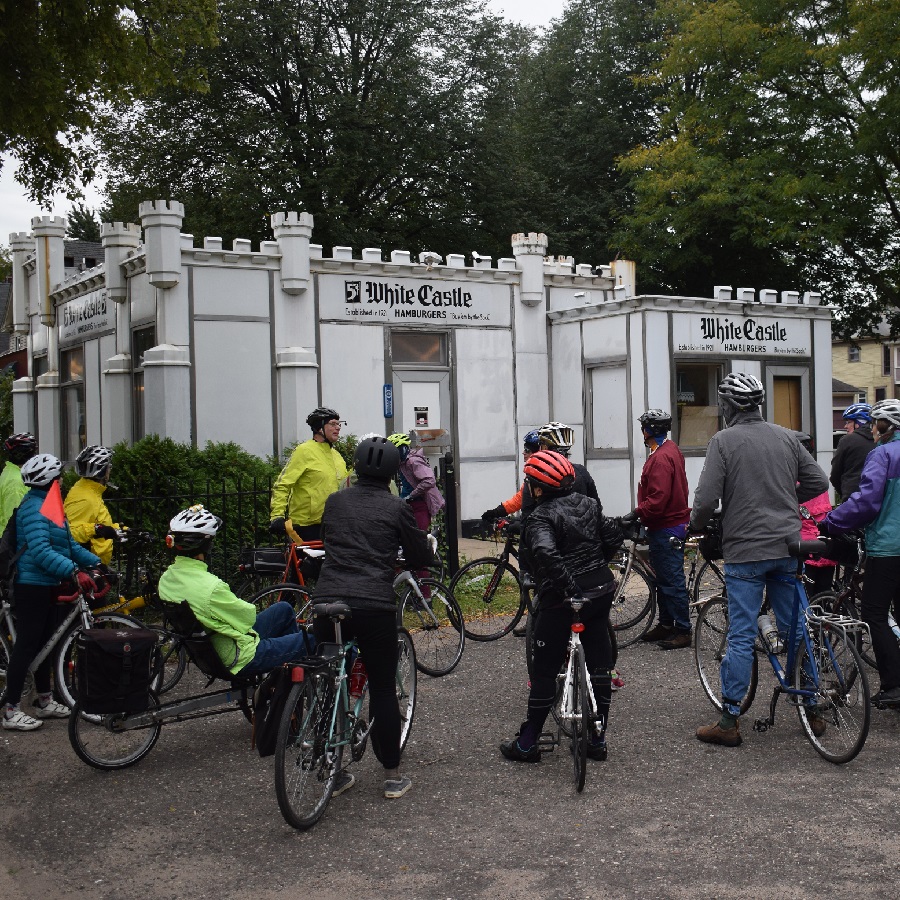 Located at 3252 Lyndale Avenue. in south Minneapolis, the porcelain-steel prefabricated building was modeled after the Chicago Water Tower. In the picture above notice the octagonal buttresses, crenelated towers, and parapet walls. The structure was designed to be dismantled and then reassembled when needed. However, after moving it the 3rd time to its current location it was moved in one piece. See more on the history of this site here. 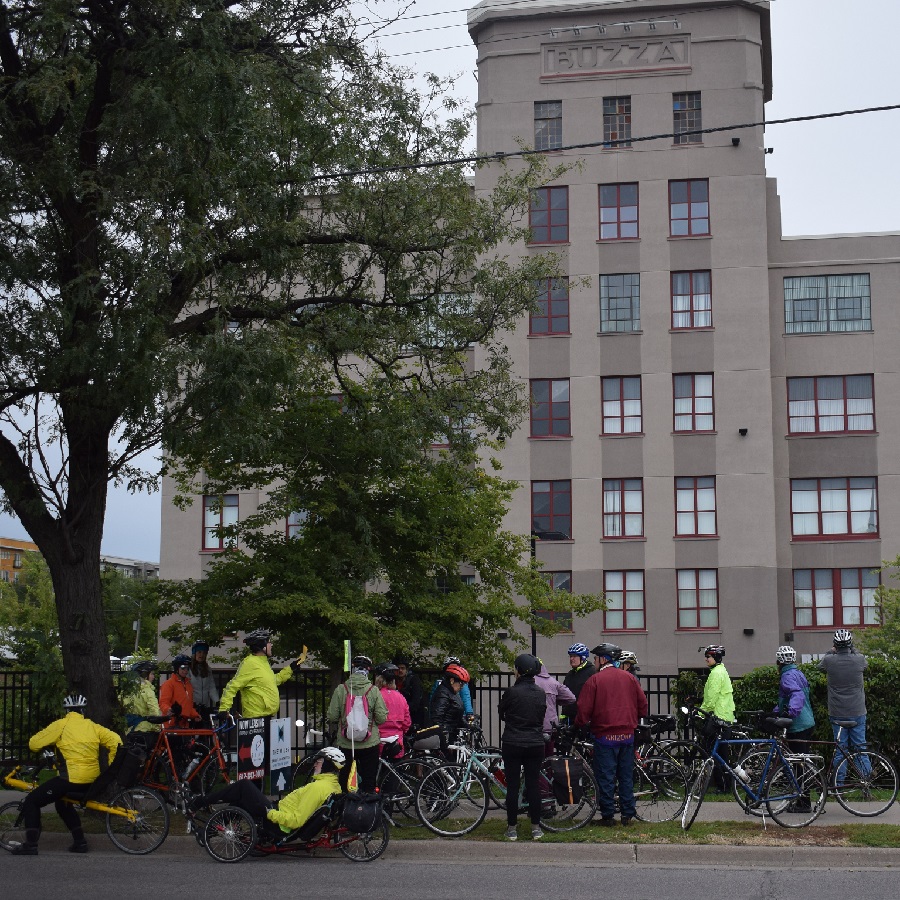 Here Joe shares information on the many uses of the Buzza Building.

This building was purchased and renamed after the second-largest greeting card company in the early 20’s country. After the business folded around 1942. Then the building was been used by the War Department; followed by Honeywell, the veteran’s administration and later by the Minnesota military district, dubbing it “Little Pentagon”.  See more on the history of this site here. 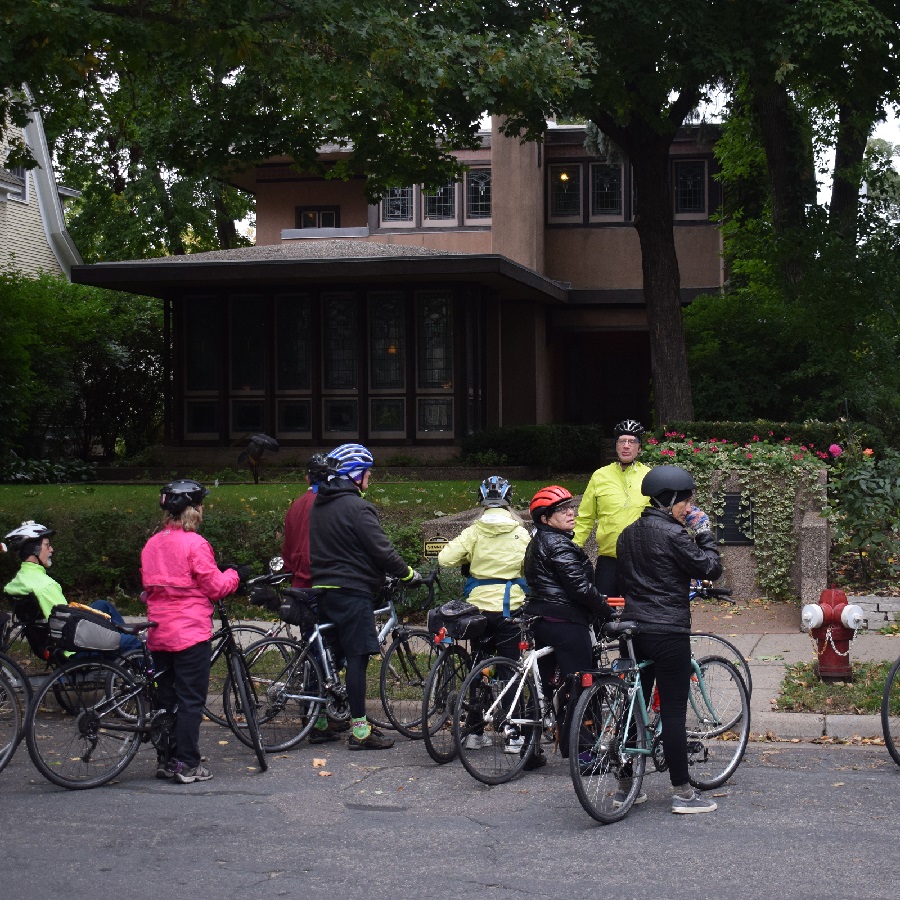 After stopping at the Purcell-Cutts House you will want to come back for one of the scheduled tours.

Considered by many a Prairie Style masterpiece the design of this 1913 residents was intended as a house for “modern American family life”. The home is now owned by the Minneapolis Institute of Art and is open for tours the second weekend of each month. See more on the history of this home here. 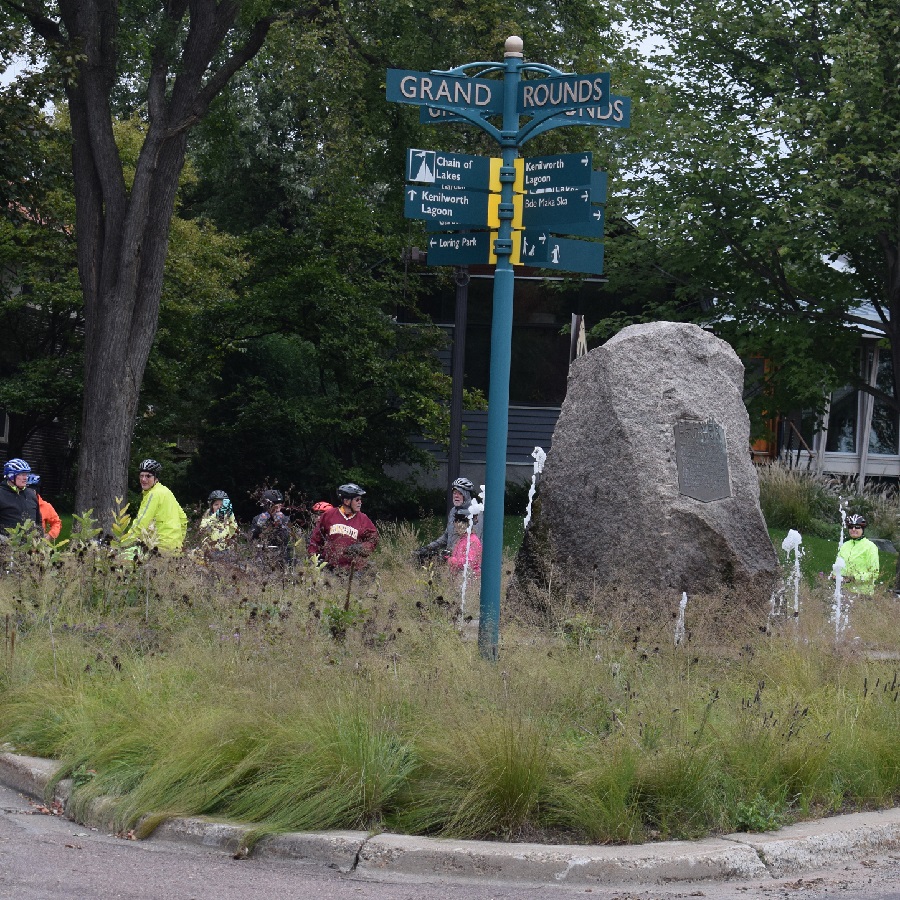 The Peavey Fountain, a gift to Minneapolis for watering horses is a gem to the Lake of the Isles Parkway.

This was a gift to the city in 1891, from Frank Peavey a local grain broker. The fountain was to provide drinking water for horses. After World War I the fountain was rededicated to honor horses from the 151st Field Artillery, killed in action. See more on the history of this fountain here. 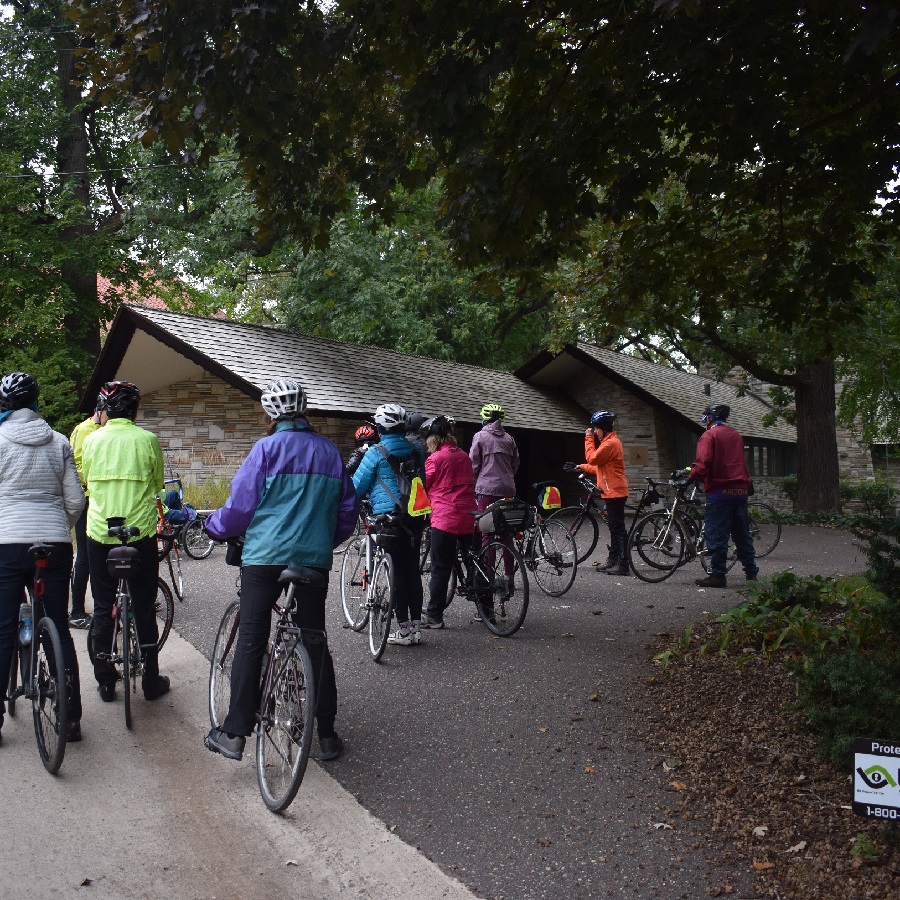 A picturesque setting for a Frank Lloyd Wright-designed home.

One of only two homes in Minneapolis designed by Frank Lloyd Wright. This home, built-in 1950-51, was the only house Wright designed that used marble wall cladding, or “culls” leftover from other building projects. See more on the history of this home here. 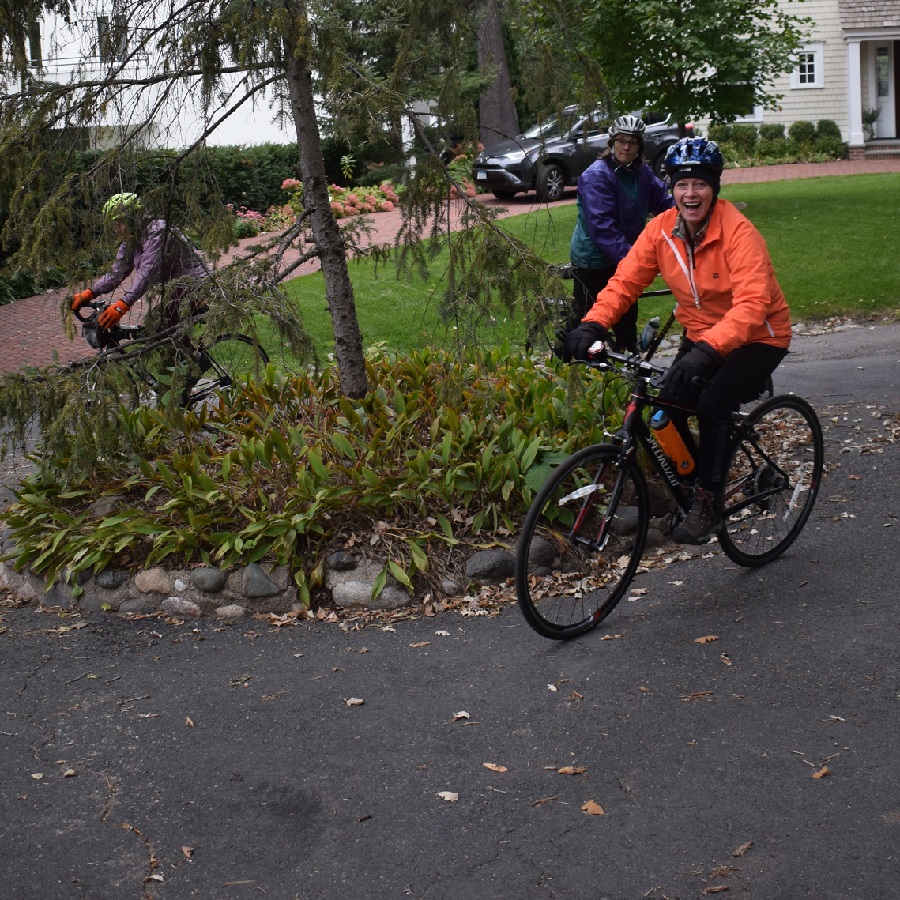 Tour riders found a charming neighborhood round-a-bout on their way to the next stop.

The history tour moves on to St. Louis Park

Pedaling to the southwest, into St. Louis Park the group of inquiring minds used the south spur of the Cedar Lakes Trail to stop at a park. Here they viewed the beehive barbeque and a tower in the background dubbed “Peavey’s Folly.” The next stop on the ride was to McDonalds #93. This restaurant location St. Louis Park was the second to open in Minnesota, in 1958.

More info on the tour In Lilac Park the group viewed one of the remaining Beehive Grills here.

The last of five parks along “Lilac Way” (now Hwy. 100), these parks were originally built in the late 30s by WPA artesian stonemasons. The fireplace here, along with another located in Graeser Park, are the only two remaining beehive fireplaces in the nation. Find out more here. 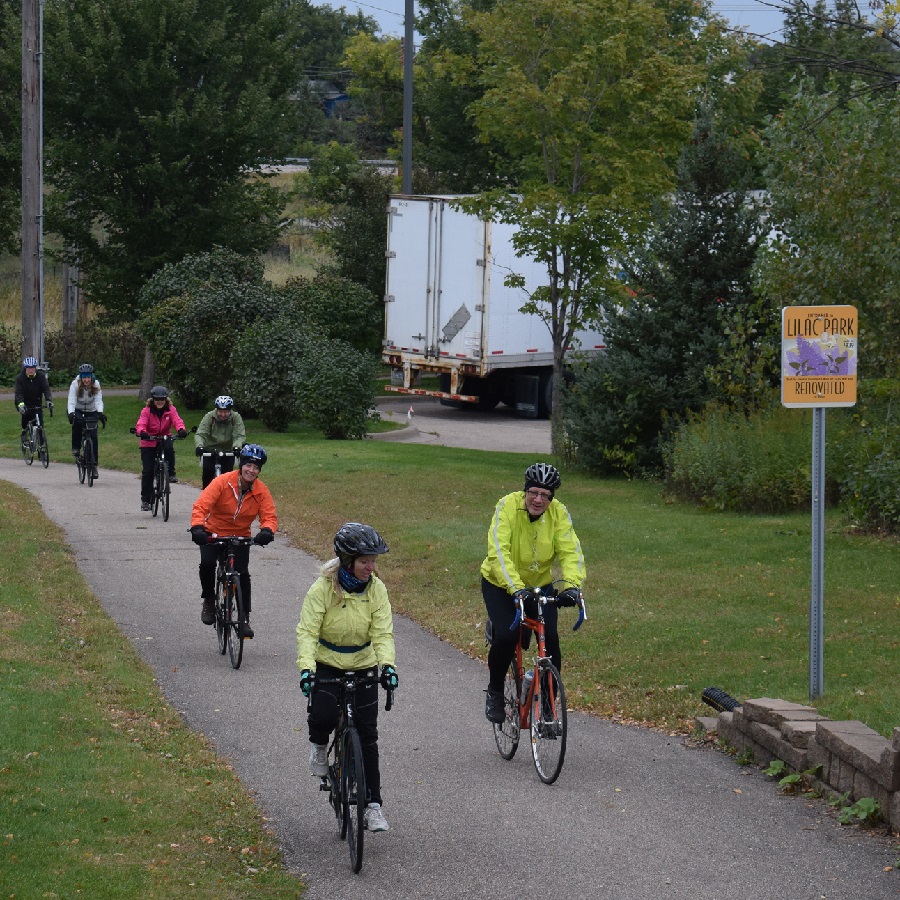 Riding out of Lilac Park back to the Cedar Lakes Trail.

Due to skyrocketing insurance rates from the constant threat of wooden grain terminals catching on fire, Frank Peavey had the Peavey-Haglin Experimental Concrete Grain Elevator built-in 1899. The 122-foot structure was dubbed “Peavey’s Folly,” by skeptics who expected it to crack and explode. Now a National Historic Landmark it is on the grounds of the Nordic Ware company, just east of Lilac Park. Find out more here.

In 1958, this location was Minnesota’s second, and the world’s 93rd McDonald’s ever built. At the Gala Grand Opening, there was a line that stretched more than a city block long, waiting for hours to be served. You can find more info here. 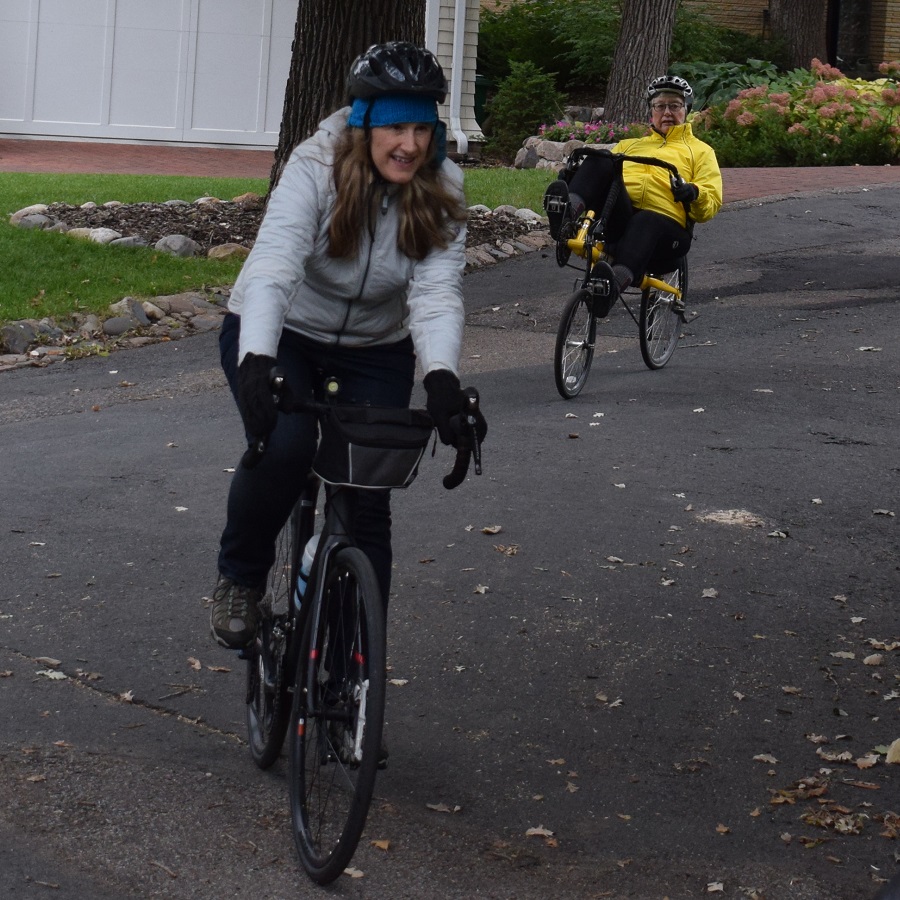 Having fun on the Hiawatha Bike Club bike tour.

Now pedaling along Minnehaha Creek the group discovers how Edina got its name when stopping at a mill site that once operated here. Another interesting stop was the Grange Hall. Both the building and organization were established to improve life on the rural farm and a place to socialize. This practice was helpful for the women at the time who had little opportunity to interact with others outside of the farm. After visiting a few more historic buildings in Edina the ride now turned back to the northeast, following the old Minneapolis Streetcar (right of way) that once stretched all the way out to Lake Minnetonka.

More info and stops along the tour The stopped here at the Grange House.

Even before Edina incorporated as a village the Grange Hall served the area with many historic events, including the final decision to name Edina. This is one of the few remaining Grange Hall structures standing in the State of Minnesota today. You can find more info here.

One of Edina’s oldest surviving buildings, built-in 1864, the Cahill School continued to serve children of all ages until the 1950s. It is one of the few remaining one-room schoolhouses in the State of Minnesota. Find more info here. Stop at the park where remnants of the old Edina Mill can be seen.

The Edina Mill was one of the first gristmills to be built on the Minnehaha Creek between 1855 and 1876. The mill and the tiny settlement that sprang up around it was originally named Waterville Mills. After being sold in 1869, the new owner gave the mill and the city its present name. Edina was a nickname the new owner had for Edinburgh, Scotland, that appeared in a poem written by Scottish poet Robert Burns. Find more info here about the mill and how Edina progressed.

The Grimes House is the oldest house standing in Edina.

Built-in 1869, it is the oldest house standing in Edina. Stopping by and viewing it from the street, it is a rare, well-preserved example of cottage architecture from the early settlement period. The Grimes who settled here also established a 16-acre ‘Lake Calhoun Nursery, which is the present-day neighborhood of Morningside. Find more info here.

The tour circles back into Minneapolis on the old streetcar route

If you look carefully, while out in front of the Grimes house, you can see traces of the old streetcar right-of-way that provided public transportation, back and forth, from Minneapolis, through Edina and out to Lake Minnetonka.

Streetcar Right of Way through the Linden Hills Neighborhood, Minneapolis

Through this neighborhood, you can still see remnants of the old streetcar right-of-way line. The Linden Hills neighborhood was at the end of the line for commuters coming from the inner city of Minneapolis. Then in 1905, the line was extended out to Lake Minnetonka, making Linden Hills a transfer stop between the two rail lines. See more info here. 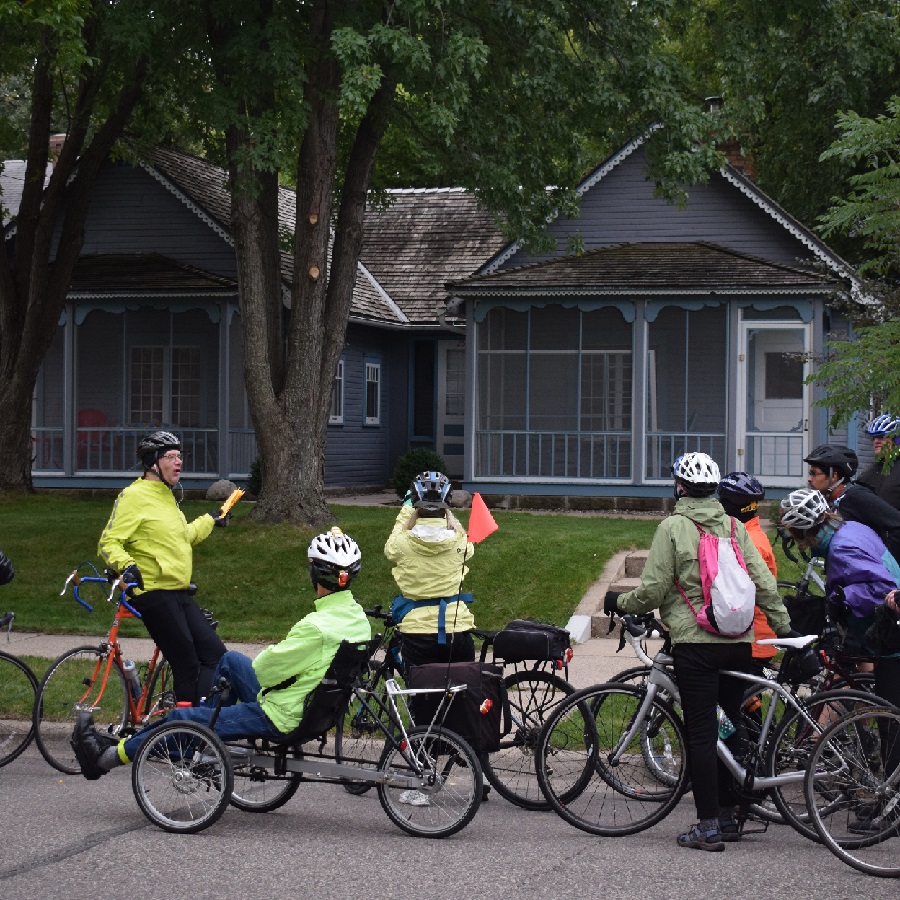 A brief stop in an area once covered by cottage homes.

The two cottages here were originally built by Loren Chadwick in 1902 and combined in 1972 as a single dwelling. The individual cottages were typical of the size home being built in the early 1900s as a resort area. This is the reason the neighborhood was known as “Cottage City”. See more info here. 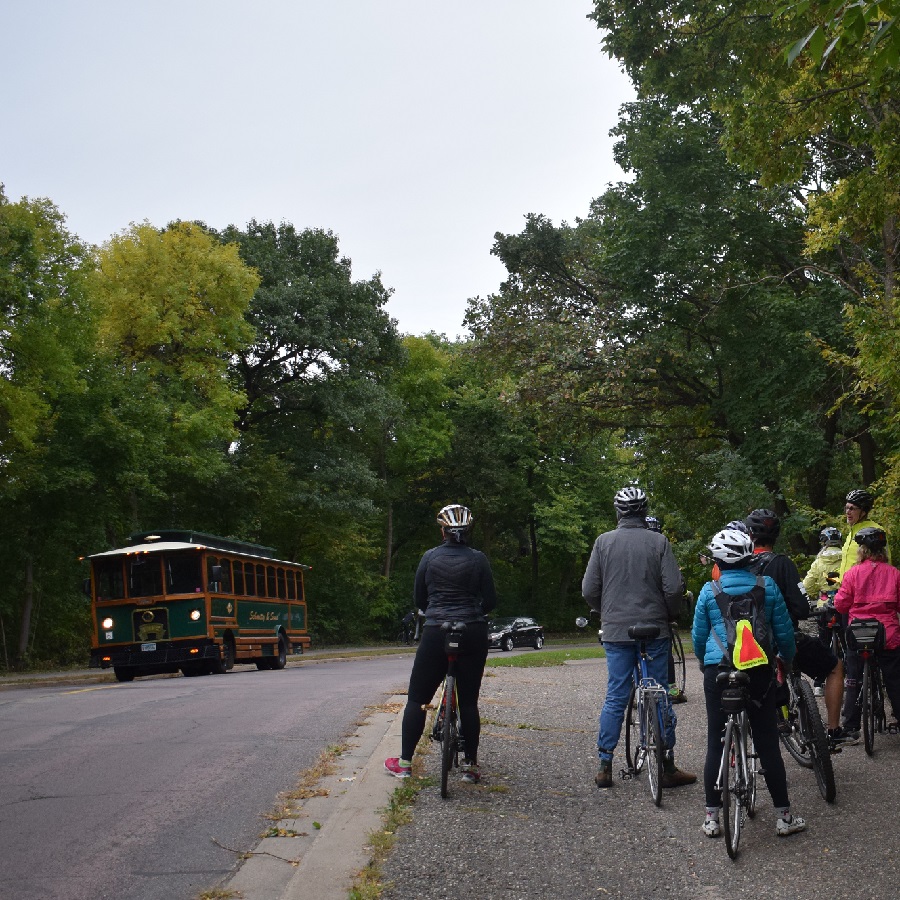 Stopping on this bridge, where the streetcar tracks run below modern-day trolley passes by.

The oldest reinforced concrete bridge in Minnesota covered by a stone veneer. The bridge was built using a system patented in 1894 by a Swiss engineer. Steps on the west side lead down to a streetcar stop known as the Cottage City stop.

Overlooking the eastern shore of Bde Maka Ska (Lake Calhoun) the Pond brothers built a cabin when they came to Minnesota to convert Native Americans from the Dakota tribe to Christianity. Then on this same site in 1877, the Lake Calhoun Pavilion (later named the Lyndale Hotel) was built with the streetcar line passing by. In the ECCO neighborhood in the Minneapolis, the original streetcar alignment crossed 36th St. on an overpass and continued along the top of the bluff, passing the Lyndale Hotel and overlooking the lake on what is now a walking path. The resort was a popular stop offering guests a dancing hall, billiards and a wide variety of recreational activities centered around the lake. Find more information here. Even with cool temps in the mid-forties, everyone was smiling as they returned to the starting point.

This brought this Magical History Tour back to the park where the ride began. Joe says, he has a couple more Magic History Tours in mind that he plans on leading, through the club next year. If you would like to go on one of his rides, check the Hiawatha Bicycle Club ride calendar periodically.