In preparation for the 700 high school students coming to compete on mountain bikes and in dedicated to Dick Schindler, Austin, MN new trail is ready for the challenge. Each year the Minnesota High School Cycling League schedules several statewide NICA-sanctioned races to provide student athletes an arena in which to set and accomplish competitive goals while achieving their personal best. With a new team created last year in Austin, the community came through this summer building a trail system where local residents and visitors could enjoy the sport. 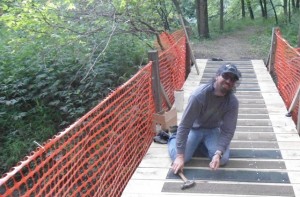 A volunteer putting the finishing touches on a bridge so riders can start breaking in the new trail system in Austin, MN.

Now that the trail is complete, a call out has been made to help “ride the trail in,” for the meet in Austin on September 20th. and the Austin Team will be able to practice on their “Home Trail” in preparation for the 2015 schedule listed below: 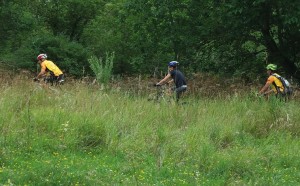 Mountain bikers checking out the new trail in Austin, MN.

“It was a great accomplishment,once the land was approved for development, to build such a trail in a little over one month”, according to Austin’s coach Spencer Salm­on. “Volunteers and community response has been nothing short of amazing. It is indeed a tribute to our friend Dick Schindler”.

“Some of the resi­dents want­ed to build trails 10 years ago, ”but it nev­er got the city’s sup­port”, Salm­on said. “This year, once it be­came known kids were going to be com­pet­ing, a plan was quick­ly put to­gether and four miles of new moun­tain bike track were built on land owned by Riverland Community College”. 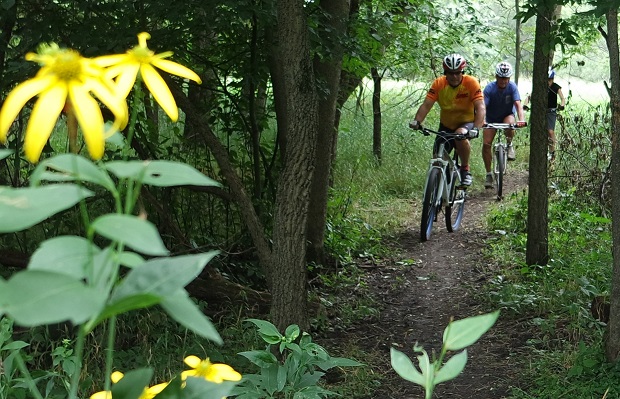 Some of the other volunteers checking out the new trail in Austin, MN.

Dick Schindler, a retired Mayo Clinic Doctor and local resident was a big advocates for building the trail in Austin, however, he passed away earlier this year on one of the trail sections he wanted to see developed.

If you are interested in visiting Austin, MN, In addition to new mountain bike trail system, checkout their new artwork center, many wonderful restaurants, the Spam Museum soon to be open in the downtown area, or even the theater and the Rydor Bicycle Museum.

See their website here for more information on the new trail and visiting Austin, MN.