The whole idea behind folding bikes is that they can be made very small and unobtrusive for transit and storage. It would follow, therefore, that the smaller they can be folded down, the better. Well, Toronto’s Peter Boutakis claims that his company’s Helix bike can fold smaller than any other. It’s also got a snazzy lightweight titanium frame.

When folded down, the Helix isn’t much bigger than its wheels

Pivoting on helical hinges, the two 24-inch wheels fold in against either side of the one-piece main frame and sit between the cranks. Once the handlebars have also been folded down, the seat lowered and the pedals flipped in, the end result is a package that measures 23 × 25 × 9 inches (584 x 635 x 229 mm). It’s only slightly wider than the crankset, and not much bigger than the wheels. Those wheels still turn when the bike is folded, allowing it to be carted along like wheeled luggage. 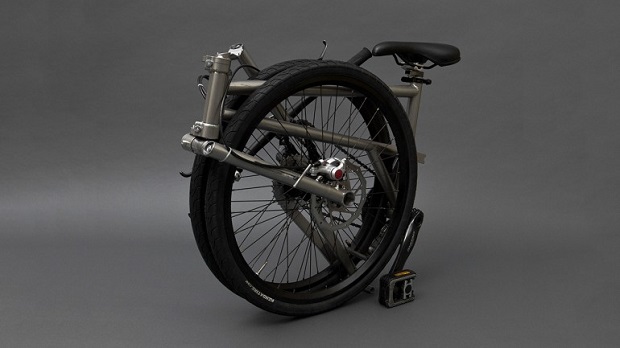 Those wheels still turn when the bike is folded, allowing it to be carted along like wheeled luggage

Tipping the scales at 21 lb (9.5 kg), it’s also said to be the world’s lightest folding bike. It can’t actually claim that title, although it’s certainly still among the lightest. 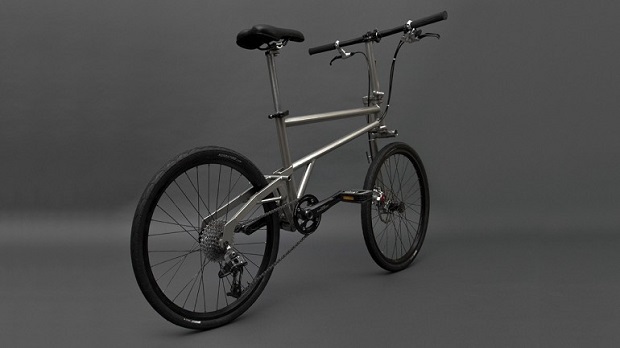 Other features include spring-loaded locking mechanisms to help keep the bike feeling rigid on the road, internally-routed cables, disc brakes, and a 9-speed transmission. Plans call for all of the CWSR (cold worked stress relieved) titanium frames to be hand-welded in Canada.

Boutakis and his team will be launching a Kickstarter campaign to raise production funds for the Helix, starting early next month. At that time, a pledge of US$1,199 will get you one, assuming all goes according to plan. The retail price will be $1,499.

You can see the bike in action, in this video: https://www.youtube.com/watch?v=WUOnLx1-7BQ