Celebrating communities coast to coast with National Bike Month, we wanted to share what residence of Winona, MN are saying. A Bronze Bike Friendly Community, this area offers many bike related activities for you to enjoy any time of the year while visiting.

Located in Southeast Minnesota along the Mississippi River, the city is a very comfortable place to explore on two wheels. Thanks to Pam Eyden, who profiled the following cyclist, we think you will agree that Winona is a place to consider while visiting with your bike.  Don’t miss the fun, also check their May Bike Month web page www.visitwinona.com/may-is-bike-month to find out what’s happening.

Kay Peterson, client services coordinator at Winona Volunteer Services, loves bicycle riding. She has six bikes — a road bike, a fat-tire bike, two mountain bikes, a winter bike with used snowmobile bar mitts to cover her arms, and her everyday bike, which she calls her “horse.” She rides her horse to work, a four-mile round trip most days. 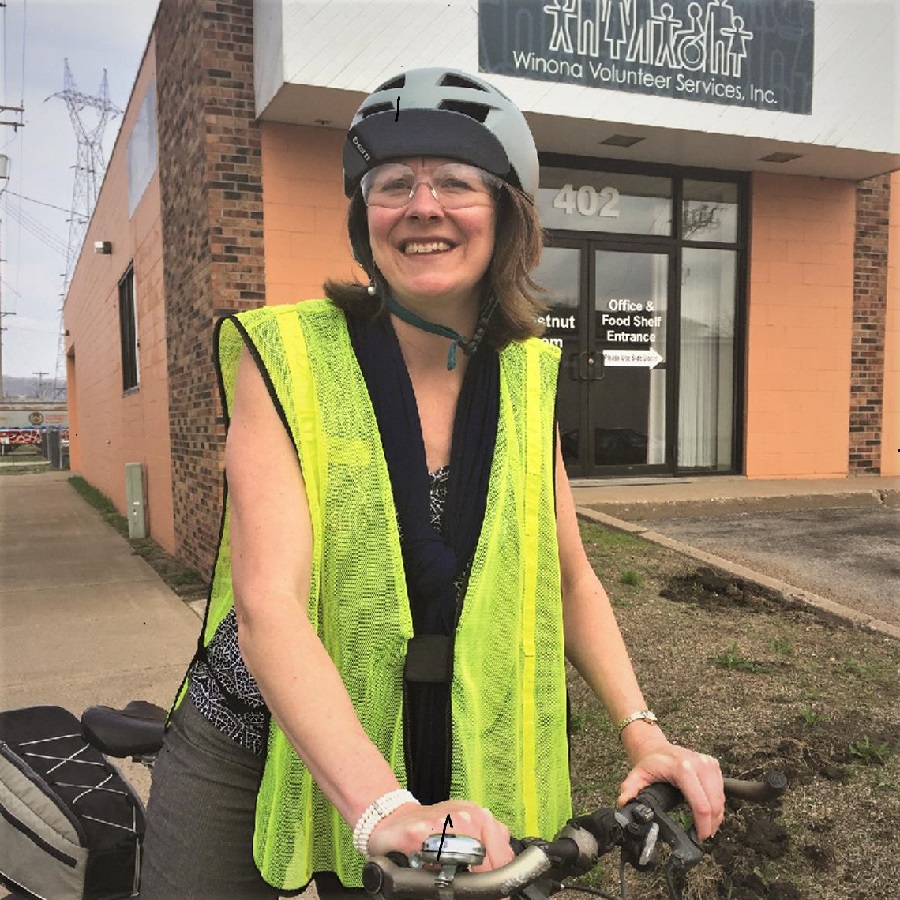 “I’ve been doing this for 10 years,” Kay said. “I started when I had an old car that burned gallons of gas just to drive short distances. It was a waste of money! I thought, ‘This is such a small town, I’ll try riding everywhere.’ After I started, I was hooked.”

She rides all year, even in the depths of winter, when wind chill temperatures are way below zero, in blizzards, ice, snow, wind and rain. She’s got the gear, she’s got the clothes and swears she never gets cold. Or not very cold.

Biking clears her mind, she said. New ideas come to her while she’s wheeling down the street. In the summer she also loves gardening. “Biking and gardening are always competing for my time,” she laughed.

A few years ago a friend persuaded her to try mountain biking. She soon came to love the challenge and the thrill of it. Her favorite trails are at Cherry Hill, in the Bronk Unit (location). “It’s a hidden gem,” she said.

Emily Krall, 31, likes biking for the freedom and for the convenience of it. Manager of Blooming Grounds Coffeehouse, in downtown Winona, she usually bikes to work, at least when the weather’s good. She lives just a couple of miles away and could easily drive or walk, but biking is best. “I haven’t timed it, but biking is probably faster than driving,” she said. “Besides, the great thing is I don’t have to find a place to park! Before I got my bike I got lots of parking tickets. I work full time — having to move my car every two hours all day is no way to live.” 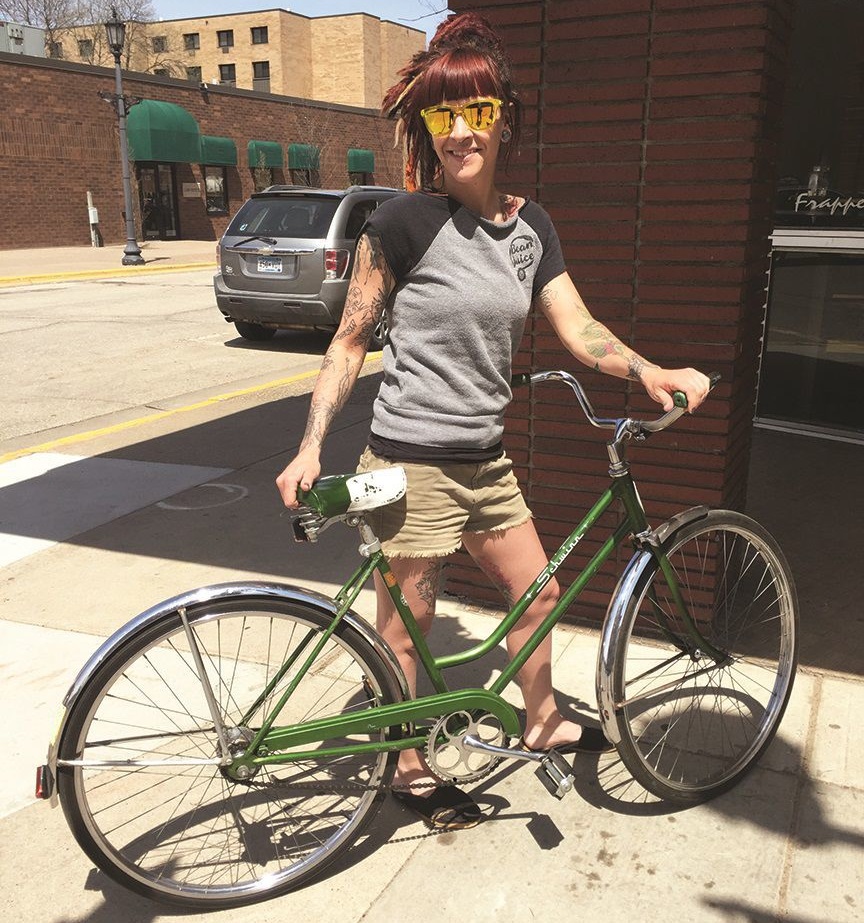 Emily lives just a couple of miles away from work and could easily drive or walk, but biking is best.

She also rides her bike to do errands, like to pick up a few things at Target. She carries purchases home in her backpack, which works fine, she said, because she’s not a person who likes to buy a lot of new stuff. She prefers the side streets and always rides defensively. “I trust that no one will hit me, but I watch everything,” she stated.

After work she enjoys touring around Lake Winona and out to Prairie Island on a 13-mile loop near the river that passes the Minnesota City Boat Club and the airport.

Access to the natural world is one thing Emily loves about Winona. She recently moved here from Greenville, North Carolina, a city of 80,000, where the traffic was bad and biking was difficult. “Greenville wasn’t bike-friendly at all. I had to drive a couple hours just to find a place to ride in nature. Here it’s so easy! There aren’t a lot of bike lanes in town, but Winona is surrounded by so much beauty!”

Bicycling has become part of the culture at the Winona Police Department. Twelve of the department’s staff are avid road bikers, mountain bikers or both. Here Paul Bostrack, Anita Sobotta and Jay Rasmussen from the department share their experiences. 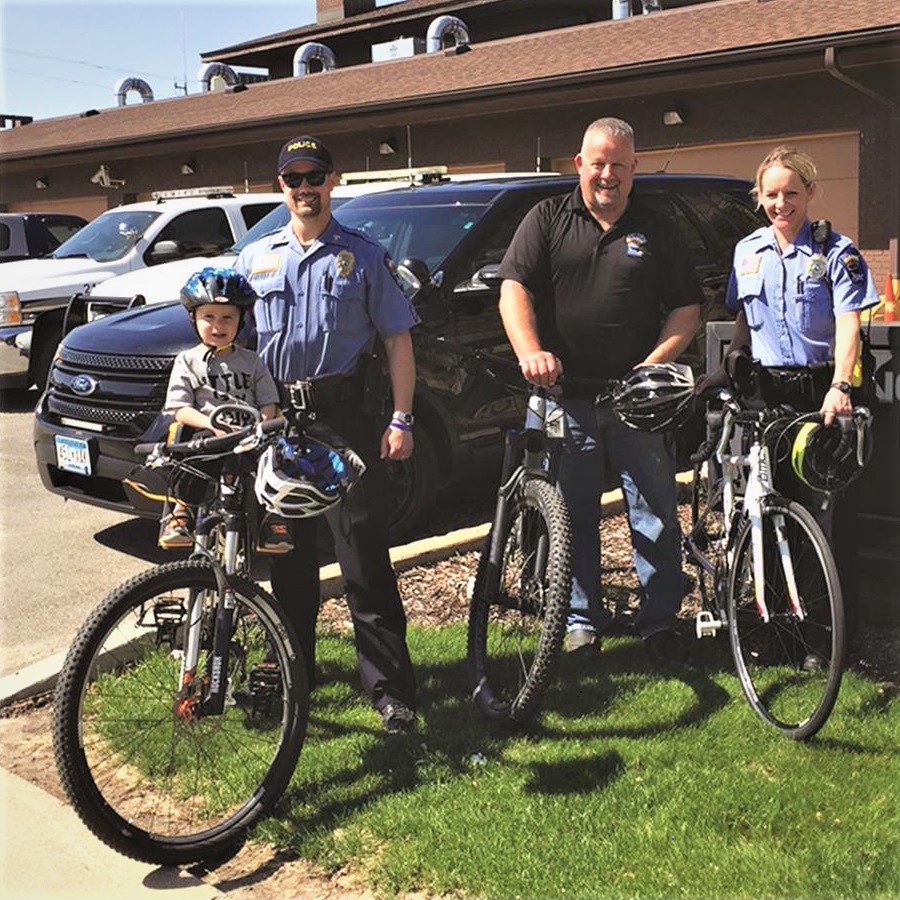 Many of the Winona Police Department staff are avid cyclists.

Police chief Paul Bostrack rides his new Trek mountain bike at least twice a week on the trails at Cherry Hill or Holzinger. When he was younger, before he had kids, he used to ride everyday and in all kinds of weather. He gave it up for a while, but now that the kids have grown up a bit, they’re getting him back into it.  “They fell in love with it. Then we went riding in Montana and it kicked me into gear. Biking is a lifetime activity,” Paul said. “I got a new bike so I can almost keep up with them,” he laughed. “Bikes have changed a lot. There’s a lot of new technology, but biking is still biking.”

For patrol officer Anita Sobotta, road biking through the hills and valleys of both Trempealeau and Buffalo Counties in Wisconsin (across the river from Winona) is a welcome chance to get away from everything.

“Riding clears my mind,” she said. “I get away from cell phones and leave all other technology behind. It’s just me and the scenery, the birds and the wildlife.”

It’s also a good workout, which she relishes. Besides biking, Anita runs those same hills, and is training for a marathon race. She always wears a helmet, but would not ride her bike in town because she doesn’t like riding in traffic.

For Winona patrol sergeant Jay Rasmussen, who works the afternoon shift, biking is both a great stress-reliever.  Especially right now, with his job and it’s a great family activity. He rides with his nine-year-old daughter to school every morning and takes his three-year-old with him whenever he goes out for fun. “I have four kids,” Jay said, “so when I go riding I always have KJ with me.”

Getting around Winona by bike, Profile #4

When Jo McGrath moved to Winona, from Rochester in 1997, friends told her to bring her bike because the town was flat and bikeable. She can’t remember why she was skeptical, but she did as they advised. Twenty-one years later, she’s still riding. She never bought a car. “I have a big bike with three baskets. That’s all I need,” she said. “If the weather’s bad or the trip is long, I can put my bike on the bus — although not if the baskets are full.”

Jo, who retired from work as a nursing assistant and personal companion, now volunteers one day a week at the Catholic Worker’s Bethany House. She lives on West Broadway and rides her bike to town several times a week — to the Bluff Country Coop, the library and farmers market. She also rides over to the river to see how the floodwaters are doing. “I just do the normal things,” she said. “I stay off of Broadway and take Seventh St. instead, which is easier.”

Using Winona’s quite neighborhood streets to get around

She used to go on biking adventures with her husband and she also rode with the bike group at the Winona Friendship Center. One of her four daughters leads bicycling tours in Europe, but biking is just a part of everyday life for Jo. She’s happy riding her bike to the Center in Winona to play ping-pong. “As a child, I had training wheels on my bike until I was in seventh grade!” she said. “I didn’t give them up until my friends wanted to go on a picnic at Mayowood. Then I learned. I was not going to ride with training wheels on my bike that day!

Jo is quite comfortable riding at her own speed, on side streets, but she’s watchful.

Sheldon Morgan discovered the sport of mountain biking in the late 1980s and has been doing it ever since. Now he rides his mountain bike at least eight hours a week and travels to other parts of the country for trail events and races, besides organizing rides here in Winona. 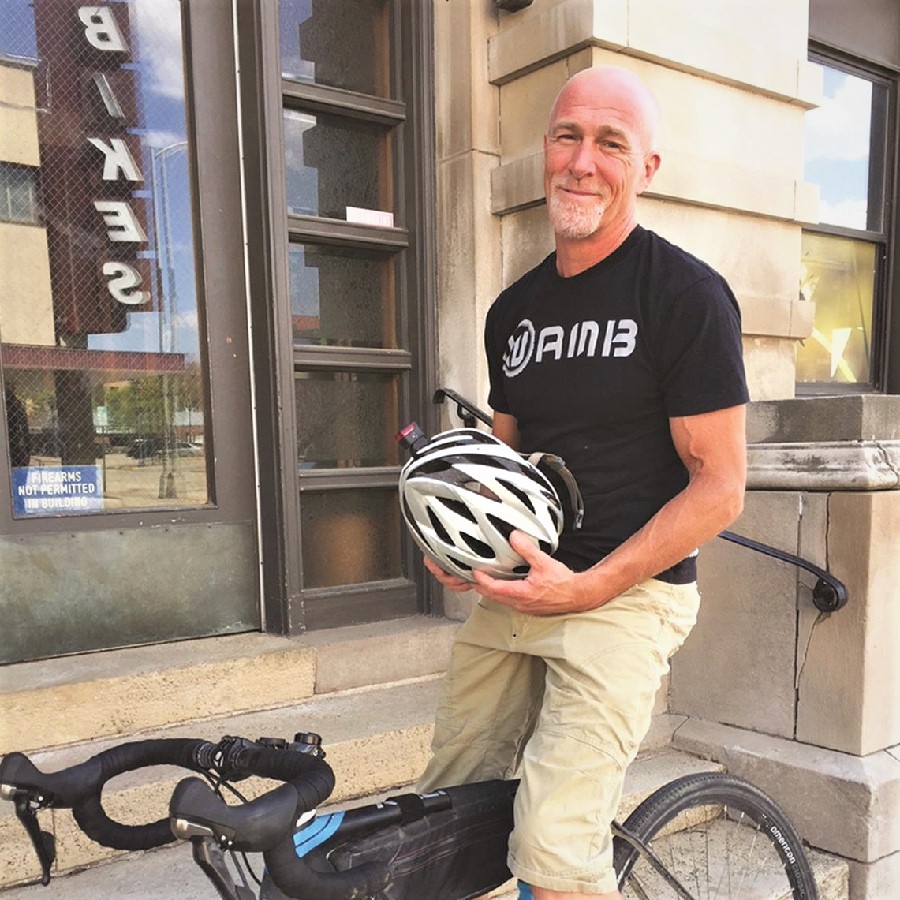 Sheldon commutes 20-mile round trip with his everyday bike.

Winter he rides fat-tire bikes in the snow

To work at his office in downtown Winona, where he consults on IT projects, he rides his everyday bike — a 20-mile round-trip commute. I ride more miles on roads, but more hours on trails,” Sheldon said. “I mostly ride on roads when the trails are wet.”
Mountain biking is number one for him. Trails put him closer to nature, which he enjoys. Riding through the woods is solitary and challenging. Endorphins and risk are also addictive.
“Even riding the same trails, you can always improve your speed, your grace, and your not-falling!” he said.

In early May he organized the Hillbilly Gravel Grinder, a 100-mile ride on the gravel county roads of Winona, Fillmore and Houston Counties. About 25 people started out at 9 a.m. and most completed the route by 6 — nine hours, including breaks. People enjoy the county roads because there isn’t as much traffic. “I ride for the mental stability and the exercise. I like to run, too, but I can’t run as long or as far as I can ride,” Sheldon said.

Over the years, Sheldon has developed an interest in and an expertise in trail design. He and a partner formed a business, Dirty Deeds Earth Services, LLC, to help with trail maintenance and design at Holzinger Park, which, he says has “old school” trails, not well designed to counter erosion. He’s also helped the city at Sugar Loaf and has designed and created single-track mountain biking trails at the Bronk Unit of Minnesota’s Richard Dorer State Forest. This area, called Cherry Hill, is one of his favorites in the area.

Trails at Holzinger and Sugar Loaf will get a new, close examination for sustainability during the Winona City park planning process this summer.

Trails can be a great therapy for kids

Sheldon believes mountain biking could be great therapy for kids who’ve lost touch with their roots and with nature. “There’s a lot of stress on teenagers these days. It’s higher than ever, because of social media and access to all kinds of media,” he said. “They need to re-engage with the world.”

Sheldon points out that parents and peers can do a lot to encourage kids, first maybe by getting on a bike themselves. “The city has to provide the infrastructure, but parents and peers bring will kids in.” That’s how he learned. “My whole family was very active in outdoor sports. It’s in my DNA, I think?”

He and his 26-year-old ride together, as they have for years. They go on mountain bike journeys together, riding and camping, and taking a break once in a while for rock climbing.
Biking, rock climbing, running and kayaking — he loves it all. “And it’s all right here in Winona!” he exults. 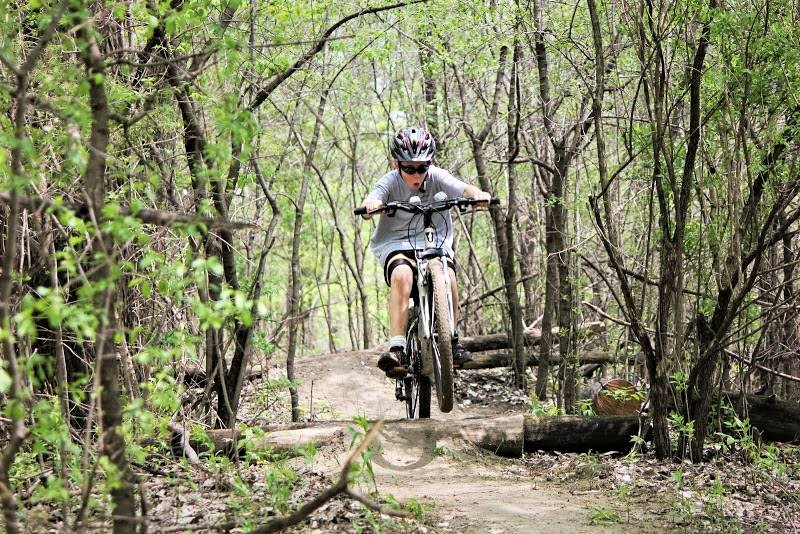 Come for the trails, see the views, then stay stay for the hospitality.