Over the years, various manufacturers and inventors have tried different ways of putting “two wheels” to the snow. The rise of fat-tired mountain bikes, not to mention extreme Antarctic fat trikes, has been the biggest news in this area, but we’ve also seen recreational equipment like the KTrak and BikeBoards. A group of mechanical engineering students at Quebec’s University of Sherbrooke is developing a new solution that aims for a smoother downhill ride by combining elements of existing winter bikes. For the Avalanche Project, the group of five Sherbrooke students is tasked with designing and building a new type of downhill bike for snow riding. You can learn a little more about the project and bike design in the video here: [Video]. 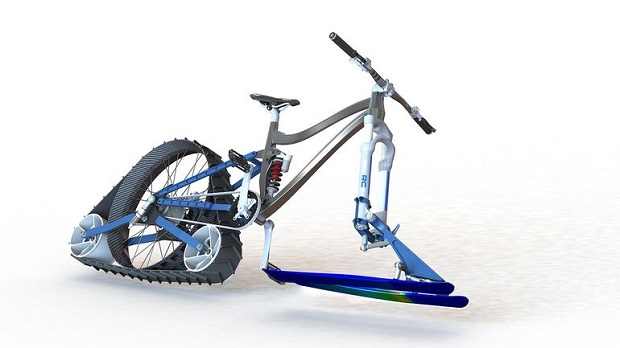 The goal is to develop a bike that better mimics the feel of summer downhill biking, a bike aimed at the experienced downhill mountain biker, not simply the novice looking for a new winter sport to try. In working on the project, the students are going well beyond simply increasing surface contact area with skis or big tires. They’re redesigning traditional bike systems to better adapt the bicycle to snow riding. 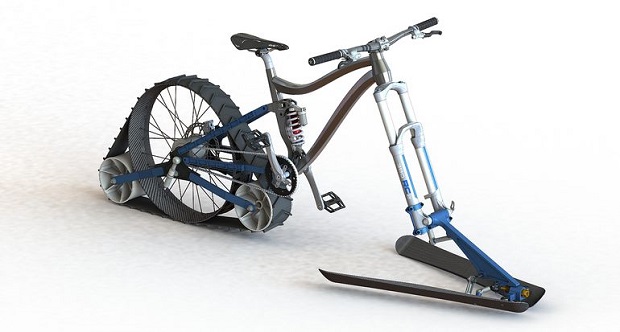 It all starts with the rear track drive. At first, it looks like a KTrak, but there are some key differences. Instead of the rear cogs typical on a mountain bike, the purpose-built snow drive on the Avalanche design uses an internal geared hub driving a central wheel. Notches on the wheel move the track, which provides traction in the snow. The drivetrain uses a Gates Carbon belt drive instead of a chain and two small wheels to help keep the track driving smoothly.

The bike also uses a purpose-built snow-braking system. The front skis tilt and angle inward, creating a V-shaped plow to bring the bike to a stop in the snow. In ski instructor terms, they turn the french fries into pizza. 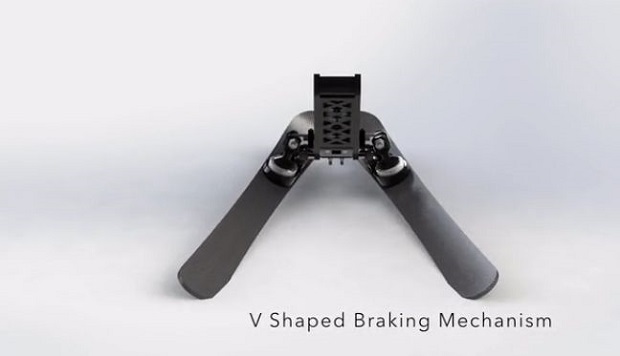 The skis on the front fork will provide better braking and turning control in snow conditions.

The Avalanche bike is still in the early stages, and the renderings suggest that the team is still finalizing design elements like the track and front ski arm. The students are reaching out to the Kickstarter community for help in funding the development of a working prototype, which they plan to complete by the end of the year. Once complete, they will test the bike’s stability, maneuverability, propulsion and braking on the snow, comparing it to the ride offered by a traditional mountain bike. They will also present the prototype at a university exposition in December.

While the students have done some feasibility research as part of the project, this isn’t currently a business venture, so they are not peddling pre-orders in their campaign. Instead, they’re offering rewards like Avalanche Project keychains, T-shirts and supporter levels to those that are generous enough to contribute to the educational project. Pledge levels start at US$5 and the goal is $2,007.

We think they’d raise the money more quickly if they offered demos of the prototype – that thing looks like fun – but we guess they don’t want to risk flunking out of the engineering program because the bike was destroyed on the mountain. Hopefully they’ll at least put out some video to show how it rides.