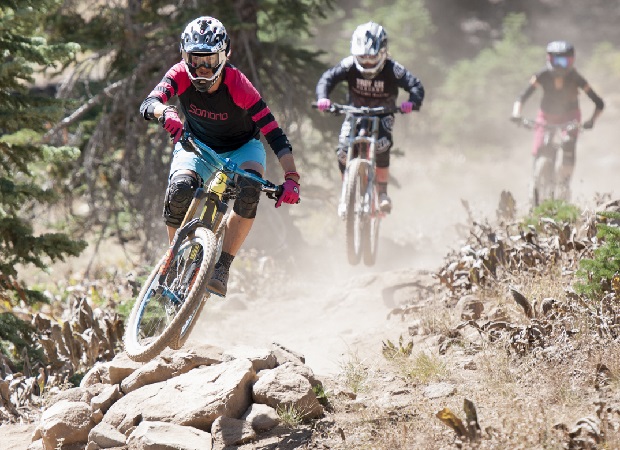 The mountain biking (MTB) film, called “Courage to Get There,” is the first episode of “THE LINE,” a series of short documentary films about the determination and courage of high performance female athletes who excel in adventure sports while shaping these sports for future generations.

An avid mountain biker himself, Kohlhoff chose MTB for the first installment of “THE LINE” because “during my research on female mountain bikers, I wasn’t finding many films which integrated the social, mental and physical components in an informative and inspirational narrative,” he said. Kohlhoff goes on to say that the international interest in the project, even in these early stages, is amazing and gratifying.

Kat Sweet, McKenna Merten and Inga Beck are the featured athletes in the MTB episode, filmed on the Tyrolean Downhill of the Tahoe Rim Trail. Watch these accomplished and unique MTB riders navigate the downhill track’s steep descents, high speeds, vertical drops and natural obstacles. Find out why they do it, what inspires them and how they progressed to high performance.

Featured rider and former downhill pro Kat Sweet said she was excited to be a part of this project and to shine some light on female athletes. “We want to see women riding and we don’t see enough of it and that has been frustrating over the years,” said Sweet. “Girls need more female role models who are kicking butt.” Sweet added that this documentary is a way to bring recognition and respect to the sport.

Middle school student McKenna Merten agrees. “We need to get more little girls riding and ripping it up,” she said. Competing since age six, Merten has many biking accomplishments in her young 13 years including 20 championships. Merten held her own and then some on the four-day documentary shoot. Excited to hang out and ride with more seasoned women riders during the filming, she exclaimed, “We are shred sisters!”

Shredding it up and creating a sisterhood of riders are favorite pastimes of amateur racer and MTB blogger Inga Beck. She was eager to participate in the documentary to “show the fun factor in this sport. You don’t have to be the best of the best to participate and be a part of something this cool.” She said that MTB is not a sport for the faint of heart and that you have to put a lot of heart and soul into it to become a good rider though the girliest girl can still shred.

“The Line” is produced by Twelve One Productions, based in Walnut Creek, CA. For more information, visit the company’s Web site at http://twelveoneproductions.com/.

The “Courage to Get There” film trailer is available at http://www.thelineseries.com and the completed film will also be linked from that Web site, planned for the end of January in 2016.